AN ISLAND the size of 25 football pitches has appeared seemingly out of nowhere off the coast of Germany.
The landmass, which is composed of sandbanks, gradually emerged from the violent waters of the North Sea over the past few years.
It lies 24 kilometres off the coast of Schleswig-Holstein in Germany’s far north in a stretch of coastline known as the Wattenmeer, a marine national park.
Nature lovers and yachstmen noticed the appearance of Bird Island – named after the seabirds who rest, nest or feed on the sand dunes that are up to almost five metres high.
Winds blew seeds from across Europe, and 49 species of plants have been detected on it.
Detlef Hansen, head of the national park, said: “This is, for us conservationists, anything but ordinary.”>>>
See Related Report below:
>>>http://www.thelocal.de/national/20130105-47149.html

A brand new island of sand dunes has risen out of shallow waters off the German North Sea coast, creating a new sanctuary for breeding birds, say wildlife experts.
It has appeared out on the north end of the Norderoogsand mudflat, 25 kilometres off the Schleswig-Holstein coastline. The new land – the size of 20 football pitches – rose out of the water over a matter of years ‘like a volcanic island,’ according to Tönnig national park rangers.

“This hasn’t happened over 25 years of the national park,” head of the park administration Detlef Hansen told Die Welt newspaper on Friday.

The island has been growing since 1999 as water and wind currents shift sand and pile up the sand, wrote rangers in the SH Nationalpark Nachrichten Tönnig park magazine.

The biggest dunes are now over four metres high and partially covered with marram grass – a perfect sanctuary for birds to hatch and nurture their young.

And species previously unseen in the area are now coming to make use of the new land, say rangers. Where a decade ago only the odd herring gull and oyster catcher could be seen, the newly-formed salt marshes and dunes are now visited by around ten different species of bird.

“This has enormously raised the ecological importance of the Norderoogsands. It is to be hoped that the rare sandwich tern will also discover these dunes as a breeding place,” Thorsten Harder head of the Jordsand Association told the paper.

The island, rising in the Red Sea, is part of a group of islands called the Zubair Group, belonging to Yemen.

2012: The Year in Volcanic Activity

Out of an estimated 1,500 active volcanoes around the world, 50 or so erupt every year, spewing steam, ash, toxic gases, and lava. In 2012, active volcanoes included Guatemala’s Volcan de Fuego, New Zealand’s Tongariro, Russia’s Plosky Tolbachik, Chile’s Puyehue, Italy’s Etna, and a new island appearing in the Red Sea. In Hawaii, Kilauea continues to send lava flowing toward the sea, and locals living near Mexico’s Popocatepetl continued to deal with ashfalls. Collected below are scenes from the wide variety of volcanic activity on Earth over the past year.

Late last year, evidence made it appear likely that this newly-formed volcanic island might become a permanent land feature, as it continued to grow. The island, rising in the Red Sea, is part of a group of islands called the Zubair Group, belonging to Yemen. Newly-formed volcanic islands can often wash away within years, but within a span of a few months, this as-yet-unnamed island grew to approximately 530 by 710 meters (1,700 by 2,300 feet). (NASA Earth Observatory/Jesse Allen) #

From Manly To New York

~ Adventures of a Sydneysider

for sharing this anomalous photo in New York!

January 9, 2013 Posted by crimarkable in Anomalies 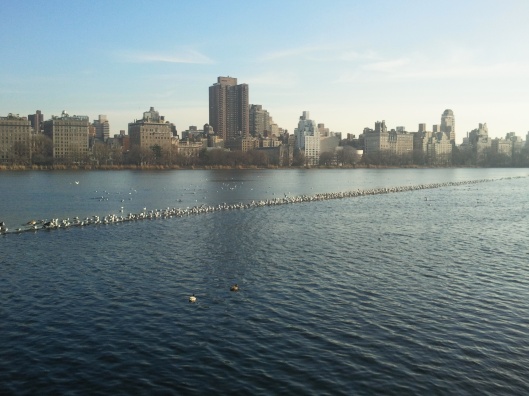 Step 1: Go for a run at the lake in Central Park

Step 3: Be oddly perplexed and amused

Step 5: Blog about it