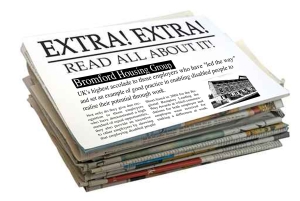 Have you ever considered What N E W S could mean?
NEWS = NORTH, EAST, WEST, and SOUTH sharing experiences…

Please share what you have with the rest of us.

When Pope Benedict XVI formally steps down from office at the end of February, his Twitter account will also be vacated—whether temporarily or permanently remains to be seen.

A report on dzBB radio said the @Pontifex account, whose English version is followed by more than 1.5 million users, is to be shut down when the Pope leaves office.

CNN quoted Vatican Radio as saying Benedict XVI may offer his last tweet on February 27, when he gives his final general audience.

If not, he may tweet for the last time on Feb. 28 “before retiring into silence,” CNN quoted Vatican Radio as saying.

According to The Vatican Today, Msgr. Paul Tighe, secretary of the Pontifical Council for Social Communications, issued the following statement: “The Twitter account @pontifex was created for the exclusive use of the Pope. @pontifex will be inactive during the interim period between the renouncement of Pope Benedict XVI and the election of his successor (sede vacante). @pontifex will be available for use by the next Pope as he may wish.”

February 25, 2013 5:57pm
http://www.gmanetwork.com/news/story/296591/scitech/socialmedia/life-after-death-on-social-media-there-s-an-app-for-that?ref=subsection_itemMemories may no longer be the only things that live on after we die. Apparently, so can our social media presence.
At least one new online social media service is keeping those we leave behind “updated” on our Twitter and Facebook content, according to a report on UK’s The Guardian.
“It offends some, and delights others. Imagine if people started to see it as a legitimate but small way to live on. Cryogenics costs a fortune; this is free and I’d bet it will work better than a frozen head,” it quoted Dave Bedwood, creative partner of Lean Mean Fighting Machine, as saying.
He also admitted this may divide people “on a gut level, before you even get to the philosophical and ethical arguments.”
Lean Mean Fighting Machine is a London-based ad agency developing a new Twitter app called LivesOn, which is to launch in March.
The LivesOn service uses Twitter bots that try to mimic a user’s online habits such as favoriting tweets or sharing links.
Here’s the creepy part: the profile it creates of the user will continue those habits even after the user has died – true to its tagline, “When your heart stops beating, you’ll keep tweeting.”
Interested users
The Guardian report quoted Mia Smith, a business owner in her mid-40s, as being interested in the service.
“But I’m not sure who’d be interested in reading a computer-generated ‘me.’ In the cold light of day, it is a very conceited thing to do,” she said.
Also, the Guardian report said anyone signing up for LivesOn will be asked to nominate an executor who will have control of the account.
DeadSocial
Meanwhile, another service, DeadSocial, puts that power in the deceased’s hands by letting the user set up messages to be sent out posthumously via Facebook and Twitter.
“It allows you to enhance your memories, extend relationships and create something of value for those who are still alive,” said creator James Norris.
But Pamela Rutledge, director of the Media Psychology Research Centre in Massachusetts, said apps that create artificial messages on behalf of the deceased are more problematic.
“What do we do if someone uses this new extension of time in a way that torments or stalks its receivers? … Death is the ultimate lack of accountability,” she said. — TJD, GMA News

The study and the research on the original Masoretic text of the Bible has lead Mr. Biglino to some staggering discoveries.
Mauro Biglino has found that in the original Hebrew text of the Bible, in the Book of Genesis, it is written that a group of individuals – called the Elohim – made man with a genetic engineering intervention, by mixing their own DNA with the DNA of primates already present on the Earth.
…In the Bible there is even a specific word that refers to the DNA, and this Hebrew word is tselem. Mr. Biglino has found that the correct translation of the famous verses of Genesis (1:26) is:

“And the Elohim (plural) said: “Let us make man in our likeness, using that thing that contains our image”.

The “thing that contains our image” is the tselem, which means “something material which contains the image, and which has been cut off from”.