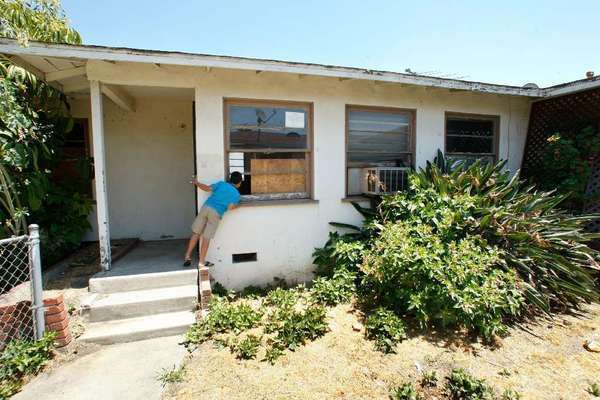 A foreclosed home in East L.A. Some checks to compensate borrowers who may have been abused during foreclosures have bounced, the Federal Reserve says. (Mel Melcon / Los Angeles Times)

Some borrowers who received compensation for possible foreclosure abuses were told to take a hike this week when they tried to cash the checks.

Just when it seemed the mortgage mess might be tailing off, it was the latest debacle for a program whose flaws have raised fresh doubts about the competence of America’s big banks and their federal regulators in Washington.

The company that the regulators chose to handle the distribution of $3.6 billion to more than 4.2 million borrowers had failed to transfer the funds to the bank that issued the checks, according to a New York Times report Thursday.

Some recipients’ checks were honored. But other borrowers called the Federal Reserve Board on Tuesday to complain that they were turned away, the Fed said in a news release Wednesday. It didn’t say how many people were affected.

“Members of the Board staff contacted the paying agent, Rust Consulting Inc., and the paying bank, The Huntington National Bank,” the Fed’s release said. “Rust subsequently corrected problems that led to some checks being rejected.”

The Fed and the Office of the Comptroller of the Currency, a Treasury Department arm that regulates banks, initially had allowed 13 banks to hire auditors to assess damages case-by-case.

The consultants were evaluating foreclosures that took place in 2009 and 2010, when the banks were overwhelmed by a flood of delinquencies and it was common for lenders to take legal shortcuts such as “robo-signing” to deal with them.

But the analysis proved too difficult for the auditors to handle in a timely fashion. When it turned out that the process was generating billions of dollars for the consultants — but not a dime to any borrower — the regulators decided to have Rust distribute funds using formulas designed to calculate the likelihood that borrowers were wronged.

The bounced checks this week were among those sent to the first 1.4 million of the 4.2 million borrowers due to receive them. The settlement calls for the banks, which include Bank of America Corp., Wells Fargo & Co. and JPMorgan Chase & Co., to provide $5.7 billion in noncash assistance to troubled borrowers in addition to the $3.6 billion in cash.

A Federal Reserve spokeswoman who specializes in mortgage issues couldn’t be reached for comment. Rust said its bosses in the matter were the Fed and the OCC, so it was required to clam up.

“Rust Consulting employees are not authorized to speak with the press concerning this matter,” a recording said at a special phone number to which the company referred calls. “Therefore, no further information is available to you through our office.”