US files appeal to block Bernanke from testifying in AIG case 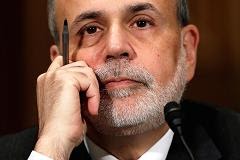 The U.S. Justice Department on Friday asked an appeals court to reverse a judge’s ruling last month that Federal Reserve Chairman Ben Bernanke must testify in a lawsuit about American International Group’s 2008 bailout.

Bernanke cannot be forced to sit for a deposition because high-ranking U.S. government officials are generally protected from getting drawn into time-consuming civil litigation, the Justice Department said in its petition.

The petition was filed in the U.S. Court of Appeals for the Federal Circuit in Washington.

“The demands of civil litigation, if not appropriately limited by the courts, will impair the ability of senior government officials to lead the departments and agencies for which they are responsible,” the petition said.

Parties to a lawsuit also do not have the right to depose agency officials to cross-examine the basis of their decisions, the Justice Department argued.

Starr was once AIG’s largest shareholder, with a 12 percent stake.

Alanna Rutherford, a lawyer for Starr, said in response to the government’s filing: “It’s disappointing that the government seeks to delay discovery of the facts in this important case.”

Judge Thomas Wheeler of the U.S. Court of Federal Claims rejected the government’s effort to keep Bernanke from being deposed, saying the Fed chairman was a “central figure” in the decision to bail out AIG.

“Indeed, the court cannot fathom having to decide this multi-billion dollar claim without the testimony of such a key government decision maker,” Wheeler wrote. “These facts constitute ‘extraordinary circumstances’ for the taking of Mr. Bernanke’s deposition.” – Judge Thomas Wheeler