For we wrestle not against flesh and blood, but against principalities, against powers, against the rulers of the darkness of this world, against spiritual wickedness in high places. – Ephesians 6:12

A grim-faced Cameron conceded after the vote that “the British Parliament, reflecting the views of the British people, does not want to see British military action.” 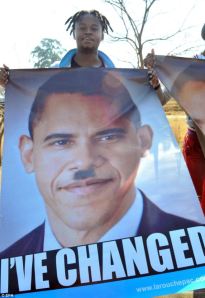 “Obama told reporters he had yet to make a final decision, but hinted at a military strike that sources and experts say would entail cruise missiles fired from U.S. Navy ships at Syrian command targets – but not at any chemical weapons stockpiles.” – CNN Text Report Fri. August 30, 2013

Like it or not, Constitution allows Obama to strike Syria without Congressional approval

By John Yoo [John Yoo, is a law professor at the University of California at Berkeley. He served as an official in the Bush Justice Department from 2001-03 and is author most recently of “Taming Globalization: International Law, the U.S. Constitution, and the New World Order” (Oxford 2013).]

President Obama has decided that he can send the U.S. military into combat without Congress’s approval.
[…]
In announcing the intervention in Libya, Mr. Obama told Congress that he was acting “pursuant to my constitutional authority to conduct U.S. foreign relations and as commander in chief and chief executive.”

*NOTE: All red text color was added by me to highlight institutions (Principalities) as the darkness exerts force here and now.

*PS:
Reminder about the Pipelines and the “New Silk Road” Commerce/Trade scheme…


and now to current events unfolding in the region as the hidden agendas are implemented to remove Syrian and Iranian opposition:

In an explosive declaration, Syria’s deputy foreign minister has now come out on record in declaring that the US, Britain, and France were instrumental in aiding the chemical attacks on Syria through a network of terrorists inside the country.

Going further with the intel on the subject, the Syrian official now says that the next target will be Europe. Confirming earlier reports by myself and powerhouse journalist Paul Joseph Watson that there was a US government element involved in the planning of the key chemical attacks as documented by Yahoo News, the deputy foreign minister told reporters outside of the Four Seasons hotel in Damascus that he had even presented the United Nations chemical weapons inspectors with bombshell information that reveals the US helped in ‘arming terrorist groups’ to carry out the attacks.

The admission is now featured on Reuters as a headline piece titled ‘Syria says ‘terrorists’ will strike Europe with chemical weapons’. The report goes on to state:

“Syria’s deputy foreign minister said on Wednesday that the United States, Britain and France helped “terrorists” use chemical weapons in Syria, and that the same groups would soon use them against Europe. Speaking to reporters outside the Four Seasons hotel in Damascus, Faisal Maqdad said he had presented U.N. chemical weapons inspectors with evidence that “armed terrorist groups” had used sarin gas in all the sites of alleged attacks.”

To break it down plainly, the deputy foreign minister is now adding power behind the January 2013 leaked emails that revealed plans for a major chemical attack as a pretext to war.
[…]