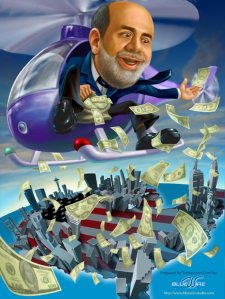 The European Union has fined eight lenders an unprecedented sum of $2.3 billion on Wednesday for rigging interest rates.

German Deutsche Bank, involved in rigging the Euribor and Japanese yen Tibor rates, was fined a total of $983 million, while the French Societe Generale was fined $605 million for manipulating the European Euribor rate.

British bank RBS, already mired in controversy, was fined $530 million for involvement in cartels which rigged both rates.

In the Euribor case, British bank Barclays benefited from immunity and will not pay a fine because it revealed the existence of the rigging to the Commission.

The investigations and fines come after a separate scandal broke over the rigging of the London Libor rate which is used as a benchmark for many types of financial contracts around the world.

The Euribor, Tibor and Libor interest rates are calculated slightly differently, but fulfill a vital function as a reference for the rates which banks are charging to lend each other.

Contracts covering a vast range of financial instruments and vast amounts of money depend in part on the interest rates indicated by Euribor, Tibor, and Libor.

“The guy that runs the show has to take the hit,” Serra said in an interview with Bloomberg Television. “If the top is not accountable, no one at the bottom of the food chain will be accountable.”

Calls by investors for chief executive officers to be penalized are intensifying after the European Commission’s record antitrust fine yesterday pushed sanctions for rate-rigging to $6 billion. Firms and their shareholders still face the pain of years of civil lawsuits related to rate manipulation, as well as regulatory settlements stretching from U.S. mortgages to attempts to rig foreign-exchange markets.

Michael Golden, a spokesman for Frankfurt-based Deutsche Bank, declined to comment for this article, as did Linda Harper, a spokeswoman for RBS, and an official for Societe Generale.

Europe’s biggest banks have racked up more than $77 billion in legal costs since the financial crisis, five times their combined profit last year, according to data compiled by Bloomberg. The total includes $20.9 billion set aside for future legal expenses. Deutsche Bank, Europe’s biggest investment bank by revenue, accounts for 36 percent of the costs.

Bankers have incurred the wrath of politicians, investors and clients for selling products that helped cause the 2007 U.S. housing-market meltdown and the financial crisis a year later. The scandal around the London interbank offered rate, the benchmark for more than $300 trillion of securities, has claimed the jobs of executives including Barclays Plc (BARC) CEO Robert Diamond, 62, last year and that of RBS investment-banking chief John Hourican in February.

“Excluding the Barclays case, sanctions can be summed up by this sentence: ‘All guilty, no one responsible,’” Jacques-Pascal Porta, who helps manage more than 600 million euros at Ofi Gestion Privee in Paris, including shares in Deutsche Bank, Societe Generale and Barclays, said by telephone. “Fines are becoming banal.”

Deutsche Bank to RBS Fined by EU for Rate Rigging

Deutsche Bank was fined 725 million euros, the biggest single penalty. Societe Generale SA (GLE) was fined 446 million euros and RBS must pay 391 million euros, the EU said in a statement in Brussels. The combined fines for manipulating the yen London interbank offered rate and Euribor, the benchmark money-market rate for the euro, are the largest-ever EU cartel penalties.

While global fines for rate-rigging reached $6 billion today, the cost to banks may climb as they face more investigations and lawsuits worldwide. EU Competition Commissioner Joaquin Almunia said the penalties won’t be “the end of the story” as regulators continue to probe additional cases linked to Libor and currency trading.

“It is only a question of time until the banks pay more,” said Alex Koagne, an analyst with Natixis SA in Paris who has a buy recommendation on Deutsche Bank. “Everybody wants this to end. Investors want to be able to analyze the underlying performance of the banks’ business while the management teams at the banks want to focus on improving that performance.”

One trader said he usually asked “four or five banks in general” to set high or low fixings for a benchmark rate, according to excerpts of chats used in the EU’s investigation obtained by Bloomberg News. Another said he had “a vested interest in making sure our fixings match,” a comment also cited in a filing related to UBS AG (UBSN)’s settlement with the U.S. Commodity Futures Trading Commission.

Zurich-based UBS and London-based Barclays Plc (BARC) weren’t fined because they were the first to inform the EU of the cartels. UBS avoided a potential 2.5 billion-euro fine and Barclays escaped a 690 million-euro penalty. Citigroup also avoided an extra 55 million-euro fine for blowing the whistle on one part of the cartel, the commission said. An EU accord includes a finding of liability that can be used in civil cases.

“JPMorgan Chase has cooperated fully with the European Commission throughout its investigation and does not believe that the firm engaged in wrongdoing with respect to the Euribor benchmark,” the New York-based bank said in a statement.

JPMorgan will separately pay 80 million euros to settle the yen Libor case “regarding the conduct of two former traders during a one-month period in early 2007,” it said. The bank was the only one not to receive any reduction for cooperating with regulators.

The settlement doesn’t determine whether the bank’s management knew of or was involved in the rate fixing or whether the traders’ actions had any impact on JPMorgan’s Libor submissions or the published rate, the bank said.

Deutsche Bank, based in Frankfurt, said the fine “reflects, in particular, the high market share held by Deutsche Bank in the markets investigated.” The levy will be covered by the bank’s existing provisions, it said. It set aside an extra 1.2 billion euros in October to cover legal costs, later increasing its reserves to 4.1 billion euros.

“The settlement relates to past practices of individuals which were in gross violation of Deutsche Bank’s values and beliefs,” Juergen Fitschen and Anshu Jain, co-chief executive officers, said in an e-mailed statement.

Deutsche Bank’s fine is still topped by the EU’s highest-ever cartel penalty for a single company when Cie. de Saint Gobain SA was ordered to pay 880 million euros for plotting with rivals to fix the price of windows sold to car manufacturers.

RBS, which paid $612 million in a settlement with U.S. and U.K. regulators, said today’s fines “are covered by provisions already made” and management has strengthened oversight of how the bank submits information to Libor and other trading rates.

Societe Generale said it was fined for “inappropriate conduct by one employee who left Societe Generale in September 2009” and who mainly responded to manipulation requests from a person at another bank.

Attempts to fix the Euribor rate occurred for the most part between March 2006 and March 2007, it said in an e-mailed statement. The settlement didn’t mention any impact on the Euribor rate as a result of this behavior, it said.

Citigroup is “pleased to resolve this matter with the European Commission and to put this investigation behind us,” the New York-based bank said in an e-mailed statement. Andrew Honnor, a spokesman for RP Martin, declined to comment. ICAP declined to comment.

The London interbank offered rate, or Libor, is calculated by a poll carried out daily on behalf of the British Bankers’ Association that asks firms to estimate how much it would cost to borrow from each other for different periods and in different currencies. The top and bottom quartiles of quotes are excluded, and those left are averaged and published for individual currencies before noon in London.