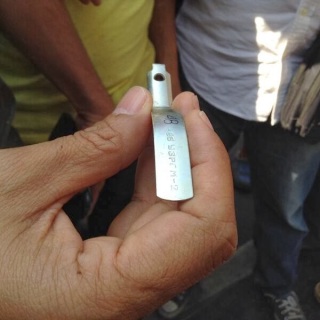 Image: What remains of a grenade thrown into an “Occupy
Bangkok” march on Friday, killing 1 and maiming 39. The
regime is now instituting an “emergency decree” claiming
that protesters, not the regime’s own terrorists carrying
out the attacks, are violent, and must be dealt with.

…
Police loyal to the regime have also made overt threats, claiming they were preparing an armed campaign against protesters if elections were delayed in a systematic pattern of violence that have become the notorious hallmarks of Thaksin Shianwatra’s regime – leaving no doubt as to who is behind recent attacks.
Astonishingly, after conducting a concerted campaign of terror against Occupy Bangkok protesters, the regime is now issuing an “emergency decree” prohibiting gatherings and inviting in draconian tactics to deal with those who defy the decree. Thailand’s English paper The Nation would report in their article, “State of emergency announced,” that:

The caretaker Cabinet announced the state of emergency for Bangkok and some parts of nearby provinces, which will last 60 days.

The state of emergency was announced on TV by caretaker Deputy Prime Minister Chalerm Yoobamrung. It will take effect on Wednesday.

Chalerm said the government had to invoke the emergency decree to announce the state of emergency because the protests by the People’s Democratic Reform Committee had turned violent.

He said the demonstrations were not peaceful as PDRC leaders said.