The popular saying: “if you can’t beat them, join them” appears to have been adopted by the Chinese.
James Rickards, and other researchers, have said that China wants more IMF influence and I infer this to mean they want a leadership position of the international monetary system.
Why not? Is a question easily answered.
The USA’s leadership has seen continuous wars over the last 5 decades, debilitating inflation, untrustworthy behaviour, misuse of military might & world’s reserve currency, and a host of other ill repute practices…

One of South Africa’s big four banks: Standard Bank.
Last week Standard Bank emerged as the potential buyer of Deutsche Bank’s seat at the global financial rigging cartel. Whilst Standard Bank maybe South African owned, it is in the process of selling its UK-based markets division to Industrial and Commercial Bank of China (ICBC – Top ranked #1 ranked Bank in the world by assets and capital). see: https://ronmamita.wordpress.com/the-one-peoples-public-trust/2013-events/#Dec2013
With continued and unrefuted reports of China’s amazing amounts of gold deliveries to buildup gold reserves implies an agreement was reached with the money cartel for those gold transfers to happen.
The Asian exchanges are reportedly expected to set the new standard of quality for precious metals from the 999 percent to 9999 percent bullion quality for Asian exchange markets.
It appears to me that China has the approval of the money cartel to be the next public icon as global leader and region of growth after the collapse of the U.S. Dollar and the economic reset, with or without world war…

Speaking about war, the likely-hood of military conflict is high (currency wars, financial war, espionage war, and military war are already occurring, yet the escalation of military interventions are more likely to spread to other regions) as the major nation states have been reported in positioning and re-positioning their military assets across the Earth and low Earth orbit.
We should recall Madeline Jana Korbel Albright as Secretary of State said:
“What‘s the point of having this superb military that you’re always talking about if we can’t use it?” ~Ron

☼
John Embry:
“I’m offended by some of the propaganda coming out of the mainstream media.  The World Gold Council came out with some figures for Chinese demand that dramatically understated the truth, and essentially falsified the demand for gold from China….
I’ve always believed that the organization should be called ‘The World Anti-Gold Council.’  They are an embarrassment to every gold company dumb enough to contribute a cent to them.  But the fact is they just keep grinding this garbage out and it is nothing but misinformation.

Then there was this remarkable release after they had their G20 Meeting down in Sydney, and these guys agreed to grow the global economy by $2 trillion more than the current trajectory.  Who do these guys think they are?  We are headed for a worldwide depression and these idiots are talking about growing the global economy an extra $2 trillion a year, without ever really saying how they are going to do it.

Then we had the requisite comments from Alan Greenspan floating across the tape this morning.  He claims there are bubbles in China, bond rates are going much higher and there is a bubble in Bitcoin, but there is no bubble in US stocks.  It’s obvious to me that there is a significant bubble building in U.S. stocks.  Just look at the $19 billion Facebook paid for WhatsApp.  This was a company that had next to no revenues.  This just smacks of another tech bubble like the one that culminated at the beginning of 2000.

As the stock market continues to surge, I see nothing of real importance going on anywhere in the economy.  We also have inflation falling to new lows in Europe.  In fact, it’s probably deflation.  The mainstream media keeps telling people that things are improving in Europe, but that’s a lie — things aren’t improving in the least.” –John Embry a man who has been involved in the financial markets for 50 years, and whose business partner is billionaire Eric Sprott 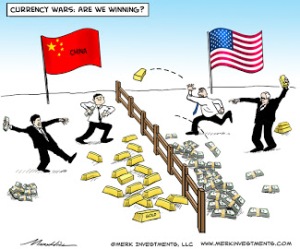 In order for our current level of debt-fueled prosperity to continue, the rest of the world must continue to use our dollars to trade with one another and must continue to buy our debt at ridiculously low interest rates. Of course the number one foreign nation that we depend on to participate in our system is China.
Unfortunately, there are signs that China has now decided to start looking for a smooth exit from the game.
China dumped nearly 50 billion dollars of U.S. debt during the month of December.
So if China is not going to stockpile U.S. dollars or U.S. debt any longer, what is it going to stockpile?
It is going to stockpile gold of course. In fact, China has been voraciously stockpiling gold for quite some time, and their hunger for gold appears to be growing.

From The Economic Collapse Blog:

China accounts for more global trade than anyone else on the planet(including the United States), and most of that trade is conducted in U.S. dollars.  This keeps demand for our dollars very high, and it ensures that we can import massive quantities of goods from overseas at very low cost.  As a major exporting nation, China ends up with gigantic piles of our dollars.  They lend many of those dollars back to us at ridiculously low interest rates.  At this point, China owns more of our national debt than any other country does.  But if China was to decide to quit playing our game and started moving away from U.S. dollars and U.S. debt, our economic prosperity could disappear very rapidly.  Demand for the U.S. dollar would fall and prices would go up.  And interest rates on our debt and everything else in our financial system would go up to crippling levels.  So it is absolutely critical to our financial future that China continues to play our game.

Unfortunately, there are signs that China has now decided to start looking for a smooth exit from the game.  In November, I wrote about how the central bank of China has announced that it is “no longer in China’s favor to accumulate foreign-exchange reserves”.  That means that the pile of U.S. dollars that China is sitting on is not going to get any higher.

In addition, China has signed a whole host of international currency agreements with other nations during the past couple of years which are going to result in less U.S. dollars being used in international trade.  You can read about many of these agreements in this article.

The Geopolitics Of Gold

Western central banks have got themselves horribly wrong-footed as a result of not adjusting their anti-gold policies to allow for the realities of Asian gold demand. Though their dealings are shrouded in secrecy, there is compelling evidence that much – if not most – of Western central bank gold has been quietly sold over the last three decades.

More recently all members of the Shanghai Cooperation Organisation, a common security and trading bloc led by Russia and China and incorporating the bulk of Asia’s land mass, have been accumulating gold. Between current SCO and future members (India, Iran, Afghanistan, Mongolia, Belarus and Sri Lanka), with their citizens numbering over 3 billion people, they have together cornered the global market for physical supply, without even taking account of demand from the rest of South East Asia’s gold-hungry population.

Federal Reserve Refuses to Submit to an Audit of Germany’s Gold Held in U.S. Vaults

The German government has been storing about half of its gold supply with the US FED, apparently in the NYC FED vaults. Germany decided to bring home all its gold, but the FED has said that isn’t possible to do, and it would need until 2020 to be able to accomplish the transfer.
The German government then asked to visit the FED vaults to inventory the gold and determine its actual existence, but the FED refused to permit Germany to examine its own gold. The reasons given were “security” and “no room for visitors”. And nothing else.
Germany did finally send some staff to the FED, and they were permitted only into the vault’s anteroom where they were shown 5 or 6 gold bars as representative of their holdings, and were permitted nothing else.
They apparently came a second time, and the FED did open only one of 9 rooms and let the Germans look at the stack of gold, but were not permitted to either enter or touch. And they returned home.
There has been speculation for a long time, that the FED doesn’t actually have much gold, that it has either sold it off, lent it out, or used it as collateral for borrowings. Either case, there are many claims that the gold that is being stored on behalf of many nations, doesn’t actually exist.
Source: http://wwwtheworldandeverythinginit.blogspot.com/2013/04/federal-reserve-refuses-to-submit-to.html
.