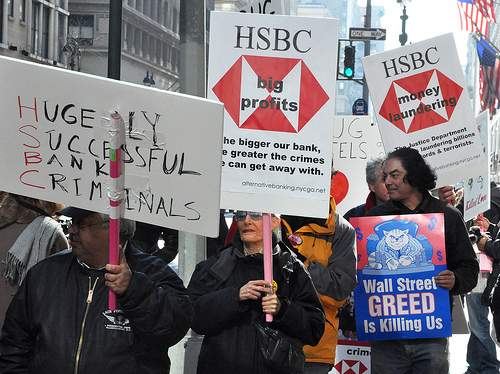 From April 7th – July 3rd, we will gather at bank locations worldwide to raise awareness on their corrupt practices and encourage people visiting the banks to move their money to local community banks. We will also encourage people to remove their money from the stock market, use alternative currencies and participate in alternative economic systems.

We will focus on the following banks these days:

If the banks above do not have branches in your hometown, please choose an appropriate banking location.

We also encourage targets such as the World Bank, IMF, WTO, BIS, ECB and any other corrupt international banking locations / offices.

Every Friday at 2pm, from April 11th – July 4th, we will march to local City Halls to call for a Constitutional amendment to end corporate person-hood and get money out of politics.

People throughout the world will focus on issues such as campaign finance, lobbying and the revolving door between governments and corrupt global corruptions.

RELATED:
https://ronmamita.wordpress.com/2014/03/02/warning-your-savings-are-not-safe-in-the-bank/
https://ronmamita.wordpress.com/2014/02/15/worldwide-wave-of-action-events-april-4-2014
February 25, 2014
(Reuters) – JPMorgan Chase & Co (JPM), the largest U.S. bank, announced thousands of job cuts on Tuesday as the mortgage lending business slows, and said it was lowering its profitability target.
The company said it expected total headcount to fall by 5,000 to 260,000 in 2014. Around 6,000 full-time and contractor jobs in JPMorgan’s home loans unit and 2,000 jobs in its branch and credit-card network will be cut.

Published February 28, 2014
A Miami judge has granted final approval to a $300 million settlement between J.P. Morgan Chase & Co. and homeowners who said they were ripped off