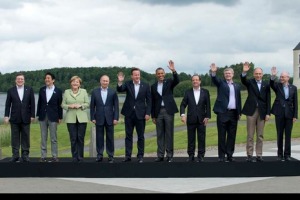 We are witnessing the current currency wars escalating precisely as many have warned.

The G7 (United States, Britain, France, Germany, Italy, Japan and Canada) and the European Union officials are blatant in their violent actions.
Discount their official words and focus on their acts.
Where is Ukraine’s gold? After the Coup d’Etat Ukraine’s gold was flown outside of nation and rumored to be in the Federal Reserve with no denial as yet.
Hmm… sounds familiar to the missing gold from Libya, Germany, and other nations when the G7 bankers are involved.
To the people in the Ukraine region caught between opposing empires our wishes, prayers and good intentions are for your personal safety, sovereignty, and well being. ~Ron
.

After two days of hectoring the U.S. State Department by telephone and e-mail, and doing so as a newspaper editor, your secretary/treasurer today recruited his U.S. representative’s office to try to extract from State an answer to the question of whether the U.S. government has taken custody of Ukraine’s gold reserves, as suggested by news reports like the one cited here: http://www.gata.org/node/13754
At last at noon today came this cordial reply from Katherine Pfaff in State’s press office:
“We refer you to the Federal Reserve Bank of New York on this.”

Of course the New York Fed yesterday already had deflected the question to the National Bank of Ukraine: http://www.gata.org/node/13761
All along your secretary/treasurer also has been querying not only the National Bank of Ukraine but also the Ukrainian embassy in Washington and the Ukrainian mission to the United Nations in New York.
Of course no reply is expected, except maybe something like “Перейти ебать себе.”
The difficulty in getting a straight answer here is pretty good evidence that the Ukrainian gold indeed has been sent to the United States.
We may have to leave further inquiry to bigger news organizations with greater resources, organizations that, unfortunately, remain too scared or controlled to get into the gold issue.

But what’s really noteworthy here is how easy important journalism about gold would be for anyone attempting it. All one has to do is put the right critical and specific questions to central banks and other government agencies, whereupon they can only refuse to answer and run away, incriminating themselves.

No one in financial journalism or gold market commentary who has not attempted to put such questions to a central bank or other relevant government agency is worth listening to.

(Reuters) – European Union member states have agreed the [document] of sanctions on Russia, including travel restrictions and asset freezes…
an annex to the sanctions document seen by Reuters – is expected to focus on targets close to Putin in the security services and military establishment as well as on prominent members of the Russian parliament.
In the past, EU sanctions against countries such as Syria, Libya and Iran have started with a list of around 20 people and entities linked to them, although Russia is a far larger country with more complex interconnections with the EU.
“The annex shall also contain, where available, the information necessary to identify the natural or legal persons, entities or bodies concerned,” reads the sanctions document.
“With regard to legal persons and entities, such information may include names, place and date of registration, registration number and place of business.”

A bank run appears to have begun in Crimea as citizens lined up Thursday to withdraw funds from Ukraine’s largest bank, Oshad.
Read More: http://www.silverdoctors.com/bank-runs-begin-in-crimea/

The Austrian authorities arrested a Ukrainian billionaire, Dmitry Firtash, on Thursday on bribery and other charges at the request of American law enforcement agencies, Austrian news agencies reported.

MOSCOW — The Austrian authorities arrested a Ukrainian billionaire, Dmitry Firtash, on Thursday on bribery and other charges at the request of American law enforcement agencies, Austrian news agencies reported. Firtash has strong connections to the ousted Ukrainian president, Viktor Yanukovych, and also conducts extensive business in natural gas with Russia.
.