We Have Been Counting The Days For “Yats” Yatsenyuk’s Resignation 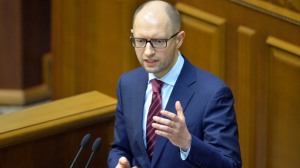 One deceiver gone and few hundred more to go.
Or if you look at the governments collectively then a few thousands of deceivers need to go!
We had predicted his ouster, and we have been counting the 144 days.
I have two questions for “Yats“:
Are you feeling safe, and where are you moving to live?
But the needs, and the scams within the Ukraine government are so stark and in your face criminals running rampant that the determination of the People living in the Ukrainian region are actively resisting the western faction of the globalists’ NWO. Or more popularly known corrupt politicians.
The corruption found in all governments today but most obviously those 193 governments that are members of the United Nations is a rot on humanity… ~Ron

Ukraine’s Prime Minister Arseniy Yatsenyuk announced his resignation in the Rada (Parliament) and that of the entire Cabinet on Thursday, July 24.  This decision was taken following the withdrawal of two parties from the coalition government and the non-adoption of two important pieces of legislation, which had been demanded by the International Monetary Fund (IMF)

“In connection with the breakup of the parliamentary coalition, as well as non-adoption of a number of important bills, I announce my resignation,”

“But the cabinet members will continue fulfilling their duties until a new coalition is formed in the Rada.”

On July 24th, the Rada failed to support the government’s bill pertaining to the 2014 budget sequestration, which had been demanded by the IMF on behalf of Kiev’s external creditors. The disbursement by the IMF of the “Second Tranche” of a 17 billion dollar policy based loan was conditional upon the prior adoption of this legislation.

The entire country is in an impasse. No money will be forthcoming from the IMF until this legislation is adopted. In the meantime, Ukraine remains on the blacklist of its external creditors.
READ More: Globalresearch.ca