The popular phrase: “Consciousness Shift” is contagious.
However, for the shift to occur the mental constructs of illusions and chains of obedience must be removed.
The past have many solitary figures exemplifying the “SHIFT”, what we want to manifest is global.
What is called for is the Massive and Popular SHIFT in the collective consciousness and awareness of the People on Earth.
Patriotic citizens, and military personnel are faced with the monumental task of shattering their false beliefs, and Trust in governments.
Disobedience with the will to face the consequences is required to exercise freedom.

An individual who breaks a law that conscience tells him is unjust, and who willingly accepts the penalty of imprisonment in order to arouse the conscience of the community over its injustice, is in reality expressing the highest respect for the law.

The list of obedient people are many as the lists of institutions are numerous.
Consider the illusions of finance and money, the illusions of religion, and the illusion of Authority…
Authority requires obedience (compliance); Freedom requires disobedience (noncompliance).
Truth was hidden and lost, and it is up to you to rediscover truth and your freedom. ~Ron
☼

Did you know the true size of AFRICA? 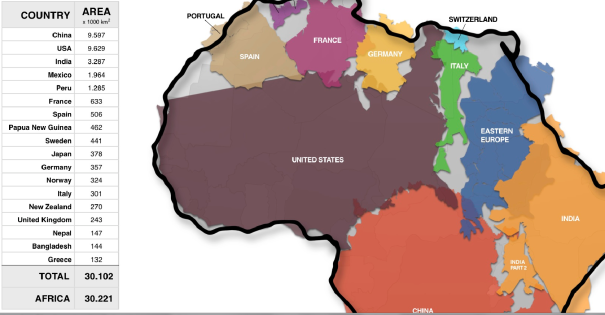 “An illusion is a distortion of the senses, revealing how the brain normally organizes and interprets sensory stimulation.” – Wikipedia
An erroneous concept or belief. The condition of being deceived by a false perception or belief.
illusions distort reality…

3 comments on “AWARENESS: Pierce the Illusions”