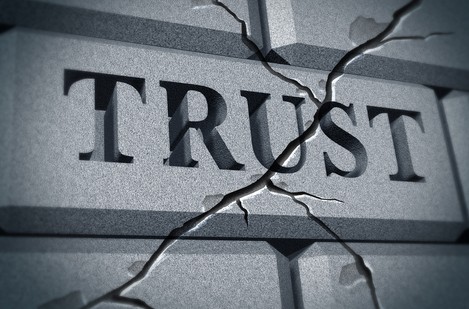 “The glue that holds all relationships together – including the relationship between the leader and the led – is trust, and trust is based on integrity.” –Brian Tracy

It is unclear if the reporters actually believe the recession ended “years ago” as the officials and executives within the Treasury and Federal Reserve claim; or if the reporters are attempting to manipulate the readers and public opinion…
Even so, the text they publish is very revealing that a majority of Americans are discontented and see government as a problem:

“People are continuing to tell us what ways [the Great Recession] is still impacting them today,” said GOP pollster Bill McInturff. “Those stories are pretty grim.”

Two words sum up the mood of the nation: Fed up.

Six in 10 Americans are dissatisfied with the state of the U.S. economy, more than 70 percent believe the country is headed in the wrong direction, and nearly 80 percent are down on the country’s political system, according to the latest NBC News / Wall Street Journal poll.

The NBC/WSJ poll was conducted July 30-Aug. 3 of 1,000 adults, including 350 cell phone-only respondents and another 43 reached by cell (but who also have a landline). The survey’s overall margin of error is plus-minus 3.1 percentage points.

“We’re in the summer of our discontent,” said Democratic pollster Peter Hart, who conducted this survey with Republican pollster Bill McInturff. “Americans are cranky, unhappy…”

“The public seems to have moved beyond the plaintive cry of ‘Feel our pain!’ to the more angry pronouncement of ‘You are causing our pain!’”

3 comments on “Mass Awakening In America?”