Recently on the Political Theatrical Stage 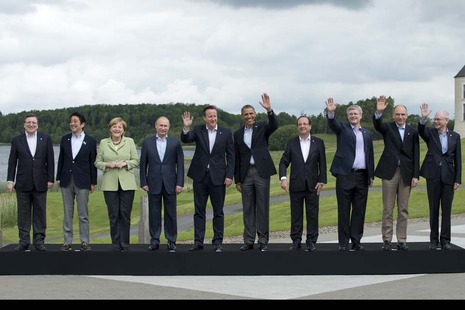 “They continue to play their deadly games… ~Ron
.

Amongst the long list of foreign policy failures and contradictions in the last few years including, of course, the bombing of Libya, the desire to arm the rebels in Syria, has been the unnecessary provocation of Vladimir Putin.

This EU empire, ever seeking to expand, stated its territorial claim on the Ukraine some years ago. Just to make that worse, of course, some NATO members said they too would like the Ukraine to join NATO. We directly encouraged the uprising in the Ukraine that led to the toppling of the president, Yanukovych, and that led of course in turn to Vladimir Putin reacting. And the moral of the story is if you poke the Russian bear with a stick, don’t be surprised when he reacts.

Just to continue with that, today we are rushing through an Association Agreement at undue speed with the Ukraine and as we speak there are NATO soldiers engaged in military exercises in the Ukraine. Have we taken leave of our senses? Do we actually want to have a war with Putin? Because if we do, we are certainly going about it the right way.

Perhaps we ought to recognise that the West now faces the biggest threat and crisis to our way of life that we have seen for over 70 years. The recent beheadings of the British and American hostages graphically illustrates the problem. And of course we have our own citizens from our own countries engaged in that struggle, too.

In the war against Islamic extremism, Vladimir Putin, whatever we may think of him as a human being, is actually on our side.

I suggest we grow up. I suggest recognise the real threat facing all of our countries, communities and societies. We stop playing war games in the Ukraine and we start to prepare a plan to help countries like Syria, like Iraq, like Kenya, like indeed Nigeria, to try and help them to deal with the real threat that faces us. Let’s not go on provoking Putin whether we like him or not.

Reply from Farage: The point that I was making was that there should be a huge degree of guilt in this house about what provoked all this in the first place, and we saw Western Ukrainians, waving European flags, rioting, setting fire to things, and effectively staging a coup d’état, which brought down the Ukrainian president, which has led to this instability. Yes, yes, you are the guilty people and you refuse to accept it.

Next week, several activities are planned with the participation of high-ranking Russian officials on the work of the Russian segment of the Internet and to disconnect it entirely from the worldwide web in an emergency.
In particular, this topic will be discussed next Monday at a meeting of the Security Council with the participation of Russian President Vladimir Putin.
Officials of the Ministry of Communications will report to the President on the results of the July exercise, the purpose of which was to test the stability of the Internet in Russia and prevent violations under unfriendly ”concerted action” or attack by the USA.
.

One comment on “Recently on the Political Theatrical Stage”