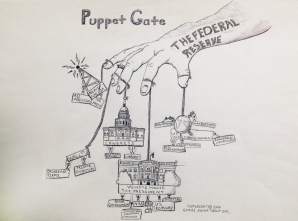 A decade of mounting public scorn, and the international movement to remove its world reserve currency status, the institution finally speaks out against financial crime within its fraudulent industry.
Regardless what the officials in the federal reserve system say, the lost trust has fundamentally damaged their public image and Trust.
William C. Dudley, President and CEO of the Federal Reserve Bank of New York, New York City spoke about “Reforming Culture and Behavior in the Financial Services Industry” as a imperative.
Very telling he had to include the important caveat “what I have to say today reflects my own views and not necessarily those of the Federal Reserve System.”
Obviously, he had to say that, because the organization he runs hasn’t practiced those ethics. Less obvious is the possibility that there are other entities that can over-rule his decisions…
The structural reforms and removal of the U.S. Dollar as the world’s reserve currency is marching forward both from within the United States and from the international community. ~Ron

As I noted earlier at the start of today’s workshop, improving culture in the financial services industry is an imperative.  This endeavor is important in order to ensure financial stability over time, but also to ensure the public trust in our financial system.  In my remarks today, I will first talk about what I see as the culture problem.  Then, I will focus on how incentives could be improved within the financial services industry to encourage better culture and behavior.  This includes how we compensate employees of a financial institution, but it also extends to how these firms identify wrong-doers and punish them.  As always, what I have to say today reflects my own views and not necessarily those of the Federal Reserve System.1

In recent years, there have been ongoing occurrences of serious professional misbehavior, ethical lapses and compliance failures at financial institutions.  This has resulted in a long list of large fines and penalties, and, to a lesser degree than I would have desired employee dismissals and punishment.  Since 2008, fines imposed on the nation’s largest banks have far exceeded $100 billion.2  The pattern of bad behavior did not end with the financial crisis, but continued despite the considerable public sector intervention that was necessary to stabilize the financial system.  As a consequence, the financial industry has largely lost the public trust.  To illustrate, a 2012 Harris poll found that 42 percent of people responded either “somewhat” or “a lot” to the statement that Wall Street “harms the country”; furthermore, 68 percent disagreed with the statement: “In general, people on Wall Street are as honest and moral as other people.”

I reject the narrative that the current state of affairs is simply the result of the actions of isolated rogue traders or a few bad actors within these firms.  As James O’Toole and Warren Bennis observed in their Harvard Business Review article about corporate culture: “Ethical problems in organizations originate not with ‘a few bad apples’ but with the ‘barrel makers’.”3  That is, the problems originate from the culture of the firms, and this culture is largely shaped by the firms’ leadership.  This means that the solution needs to originate from within the firms, from their leaders.

What do I mean by the culture within a firm? Culture relates to the implicit norms that guide behavior in the absence of regulations or compliance rules—and sometimes despite those explicit restraints.  Culture exists within every firm whether it is recognized or ignored, whether it is nurtured or neglected, and whether it is embraced or disavowed.  Culture reflects the prevailing attitudes and behaviors within a firm.  It is how people react not only to black and white, but to all of the shades of grey.  Like a gentle breeze, culture may be hard to see, but you can feel it.  Culture relates to what “should” I do, and not to what “can” I do.

A number of factors have contributed to the cultural failures that we have seen.  An important question is whether the sheer size, complexity and global scope of large financial firms today have left them “too big to manage.”  Large problems can originate in small corners of these firms, as illustrated by the Financial Products Group experience at AIG, and the “London Whale” episode at JPMorgan.  Differences in attitudes and business practices across countries can also be difficult to reconcile within a firm’s overall compliance function.  Recent fines against BNP Paribas for violating U.S. sanctions programs and providing dollar funding to a country engaged in genocide and against Credit Suisse for facilitating tax evasion by U.S. citizens, point to these challenges.  Another important element affecting culture has been the shift in the prevailing business model away from traditional commercial and investment banking activities to trading; that is, from client-oriented to transaction-oriented activities.  Clients became counterparties—the other side of a trade—rather than partners in a long-term business relationship.  In general, interactions became more depersonalized, making it easier to rationalize away bad behavior, and more difficult to identify who would be harmed by any unethical actions.

High-powered pay incentives linked to short-term profits, combined with a flexible and fluid job market, have also contributed to a lessening of firm loyalty—and, sometimes, to a disregard for the law—in an effort to generate larger bonuses.  Often allegiance to an external network of traders has been more important than the ties the trader has to his or her particular employer.  This is particularly evident in the illegal manipulations of the London Interbank Offered Rate (LIBOR), and with respect to reference rates in the foreign exchange markets.

Although cultural and ethical problems are not unique to the finance industry, financial firms are different from other firms in important ways. First, the financial sector plays a key public role in allocating scarce capital and exerting market discipline throughout a complex, global economy.  For the economy to achieve its long-term growth potential, we need a sound and vibrant financial sector.  Financial firms exist, in part, to benefit the public, not simply their shareholders, employees and corporate clients.  Unless the financial industry can rebuild the public trust, it cannot effectively perform its essential functions.  For this reason alone, the industry must do much better.

As was discussed earlier, in the U.K., seven of its largest banking institutions have recently founded the Banking Standards Review Council under the leadership of Sir Richard Lambert, who joined us today.  I would strongly encourage the largest institutions based here in the United States to work to develop collaborative solutions aimed at improving culture and rebuilding the public trust.

The Key Role for Senior Leadership

Correcting this problem must start with senior leadership of the firm.  The “tone at the top” and the example that senior leaders set is critical to an institution’s culture—it largely determines the “quality of the barrel.”  As a first step, senior leaders need to hold up a mirror to their own behavior and critically examine behavioral norms at their firm.  Sustainable change at any firm will take time.  Turning around a firm’s culture is a marathon not a sprint.  Senior leaders must take responsibility for the solution and communicate frequently, credibly and consistently about the importance of culture.  Boards of directors have a critical role to play in setting the tone and holding senior leaders accountable for delivering sustainable change.  A healthy culture must be carefully nurtured for it to have any chance of becoming self-sustaining.