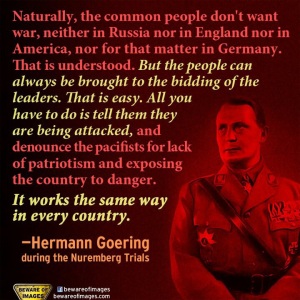 I recall the last time the Repugnicans were in full control of both Congressional chambers, they mastered coercion and brutality tactics to force their policies and agendas, we can expect more of that in even greater degrees for escalating war.
The expectation is that the 2016 elections will grant the White House to the one party as well.
That is the likely scenario, but all of the above is written merely as reminder to point out that more war escalation is expected by iconic, rabid, war mongers such as republican Senator John McCain from Arizona.
A simple false flag operation, would be the only requirement to gin up the war machine to crush all opposition… ~Ron
.

Sen. John McCain (R-Ariz.) says he is “leaning towards” running for reelection and is well aware he’ll likely face a tough primary challenge from the right.

Who were all the people Sen. McCain met remains secret (with the excuse their lives are threatened…)
McCain claims photos of him with Islamic State militants during a Syria visit last year are misleading…
McCain blasted Rand Paul for repeating the story: “He’s getting his information from Hezbollah. It’s outrageous”

“The people in the pictures with Senator McCain in Syria included General Salim Idris, then-Chief of Staff of the Supreme Military Command of the Free Syrian Army (FSA), Mouaz Moustafa, the Executive Director of the DC-based Syrian Emergency Task Force (which supports the moderate opposition and helped arrange some of the trip), and fighters and commanders from the Northern Storm Brigade, a FSA-aligned group,” -McCain’s spokesman Brian Rogers told Breitbart News.
.
Remember McCain’s visit to Ukraine:

6 comments on “Warmonger Sen. John McCain, the expected next chairman of the Senate Armed Services Committee”