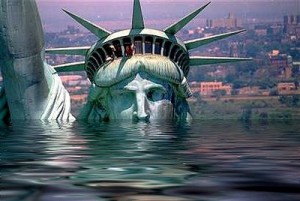 The Debt Burden is Rising!

Via: gata.org
By Seth Lipsky The Wall Street Journal Monday, December 1, 2014Bernard von NotHaus may go to prison for making Liberty Dollars, but he has raised serious currency questions.
Tuesday morning at 9:30, a federal judge in North Carolina will gavel his court into session to pronounce a sentence on Bernard von NotHaus. A monetary gadfly in an age of fiat money, Mr. von NotHaus, 70, could be looking at the rest of his life in prison.Nearly four years ago, a jury convicted Mr. von NotHaus of “uttering”—putting into circulation—coins of pure silver that he called Liberty Dollars. The government is also seeking the forfeiture of 16,000 pounds of coins and precious metals whose value it reckons at $7 million. …

… Mr. von NotHaus’s Liberty Dollar poses the opposite danger of Copernicus’ famous monetary principle. That principle, also known as Gresham’s law, holds that bad money drives out good. Mr. von NotHaus has instilled in the government the contrary fear — that good money in the form of silver dollars will drive out the bad money issued by the Federal Reserve. …

These matters were considered by Judge Voorhees, who has been presiding in the von NotHaus case. They were raised most pointedly in an amicus brief by the Gold Anti-Trust Action Committee, a charity that fights for a constitutional view of money. …

… For the remainder of the commentary, in the clear:
http://online.wsj.com/articles/seth-lipsky-a-monetary-gadfly-in-an-age-of-fiat-money-1417478381
.

We have it only through a reliable intermediary that Liberty Dollar founder Bernard von Not Haus, oonvicted rather strangely almost four years ago of counterfeiting for issuing silver coins worth more than the originals they were supposed to be imitating, received a lenient sentence today from Judge Richard Voorhees in U.S. District Court for the Western District of North Carolina — six months of home confinement and three years of probation.

A lawyer representing GATA appeared in court today to argue for leniency for von Not Haus.

More as it becomes available.

The judge in the Liberty Dollar case in U.S. District Court for the Western District of North Carolina, Richard Voorhees, yesterday ordered some of the Liberty Dollar’s coinage and metal forfeited to the U.S. government and some silver deposited by Liberty Dollar founder Bernard von NotHaus’ mother returned to her. The judge also recommended that the U.S. Treasury Department consider applications from Liberty Dollar customers for return of their metal if the customers claim not to have been participating in a counterfeiting scheme. The judge’s forfeiture order is posted in PDF format here: