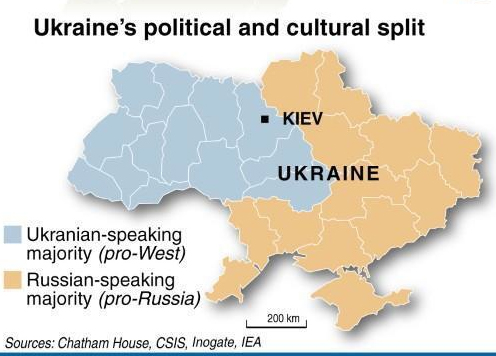 Western Bloc (G7 and European Union) vs Eastern Bloc (Russian federation and others)?

Vladimir Putin ordered the Russian state energy giant Gazprom to cut supplies to and through Ukraine amid accusations, according to The Daily Mail, that its neighbor has been siphoning off and stealing Russian gas. Due to these “transit risks for European consumers in the territory of Ukraine,” Gazprom cut gas exports to Europe by 60%, plunging the continent into an energy crisis “within hours.” Perhaps explaining the explosion higher in NatGas prices (and oil) today, gas companies in Ukraine confirmed that Russia had cut off supply; and six countries reported a complete shut-off of Russian gas. The EU raged that the sudden cut-off to some of its member countries was “completely unacceptable,” but Gazprom CEO Alexey Miller later added that Russia plans to shift all its natural gas flows crossing Ukraine to a route via Turkey; and Russian Energy Minister Alexander Novak stated unequivocally, “the decision has been made.”

Russia plans to shift all its natural gas flows crossing Ukraine to a route via Turkey, a surprise move that the European Union’s energy chief said would hurt its reputation as a supplier.

Sefcovic said he was “very surprised” by Miller’s comment, adding that relying on a Turkish route, without Ukraine, won’t fit with the EU’s gas system.

Gazprom plans to deliver the fuel to Turkey’s border with Greece and “it’s up to the EU to decide what to do” with it further, according to Sefcovic.

Which, as The Daily Mail reports, has led to a major (and imminent) problem for Europe…

Russia cut gas exports to Europe by 60 per cent today, plunging the continent into an energy crisis ‘within hours’ as a dispute with Ukraine escalated.

This morning, gas companies in Ukraine said that Russia had completely cut off their supply.

Six countries reported a complete shut-off of Russian gas shipped via Ukraine today, in a sharp escalation of a struggle over energy that threatens Europe as winter sets in.

Bulgaria, Greece, Macedonia, Romania, Croatia and Turkey all reported a halt in gas shipments from Russia through Ukraine.

*  *  *
As Bloomberg goes on to note, Gazprom has reduced deliveries via Ukraine after price and debt disputes with the neighboring country that twice in the past decade disrupted supplies to the EU during freezing weather.

“Transit risks for European consumers on the territory of Ukraine remain,” Miller said in an e-mailed statement. “There are no other options” except for the planned Turkish Stream link, he said.

“We have informed our European partners, and now it is up to them to put in place the necessary infrastructure starting from the Turkish-Greek border,” Miller said.

Russia won’t hurt its image with a shift to Turkey because it has always been a reliable gas supplier and never violated its obligations, Russian Energy Minister Alexander Novak told reporters today in Moscow after meeting Sefcovic.

“The decision has been made,” Novak said. “We are diversifying and eliminating the risks of unreliable countries that caused problems in past years, including for European consumers.”

That helps to explain today’s epic meltup in NatGas futures…

“We do not understand how we will deliver gas to Europe. This means that in a few hours problems with supplies to Europe will begin.”

Check to you Europe (i.e. Washington)… Because it’s getting might cold in Europe…

(and bear in mind the consequences of cold, pissed off Europeans in the past).

Arseniy Yatsenyuk: “All of us still clearly remember (during WW2) the Soviet invasion of Ukraine and Germany”

This week, Ukraine Prime Minister Arseniy Yatsenyuk said the USSR had invaded Germany and Ukraine in WW2. Despite attempts by the Western press to bury the story, Russia is now demanding answers from Berlin.

Nothing is louder than silence. I know this, you know this and you can be sure that Angela Merkel knows it too. Why then is the Chancellor’s government refusing to comment on Arseniy Yatsenyuk’s extraordinary remarks? The reasons are complex, as I will shortly outline. First, though, here’s what Yatsenyuk actually said.

“All of us still clearly remember the Soviet invasion of Ukraine and Germany,” he told German-state broadcaster ARD. “We need to avoid [a repeat of] it.”

“Nobody has the right to rewrite the results of the Second World War,” he also added. “Russia’s President Putin is trying to do exactly this.”

When I saw the comments on my Twitter timeline, I was initially convinced it was a joke. So much disinformation is circulated on the platform that I automatically dismissed it as a misquote. Surely a senior politician wouldn’t say something like that? Only 24 hours later, when I saw Yatsenyuk’s words still swooshing through the Twitter-sphere, did I realize that he actually did utter those words.

Arseniy Yatsenyuk, apparently handpicked for the PM post by US diplomat Victoria Nuland, believes the USSR invaded Germany in WW2. This runs contrary to the almost universally accepted narrative that Germany actually attacked the Soviets first in Operation Barbarossa. After repelling the attack, USSR forces eventually made it to Berlin where they met the other liberating powers, the USA and Britain.

Naturally, some are claiming that Yatsenyuk made a slip of the tongue. This is hogwash. The only thing that dropped was his mask. I’ve heard similar remarks before and the location was Western Ukraine, where the PM is from. Yatsenyuk hails from Chernivsti, widely regarded as the region’s second cultural capital, after Lvov, which is viewed by many as the nationalist stronghold.

Something interesting used to happen each May 9 in Ukraine (the anniversary of the German surrender in 1945). Kiev, Kharkov, Odessa, Donetsk, Dnipropetrovsk and all the other major cities, bar one, honored the defeat of the Nazis. Many in Lvov have never looked too happy with the day. In fact, in 2011, local ‘patriots’ went a step further by attacking a small gathering of veterans who were commemorating the occasion.

The reason for this feeling is simple. West Ukrainians believe that they lost the war. Their side was defeated. Put simply, Yatsenyuk is merely a product of his environment. However, this time he expressed publicly a view that was probably previously restricted to private discourse. It’s possible that he felt a German audience might have been sympathetic to his position. If so, that was a huge misread of the German people.