Home › Freedom-Expressed › Truth and Freedom Advocates, You Are Not Alone

Truth and Freedom Advocates, You Are Not Alone

I want your help to save the People of Earth

I thank Justin, Scanned Retina and others for sharing their dialogues world wide.
My wish is for our discussions to reach all People on Earth. ~Ron 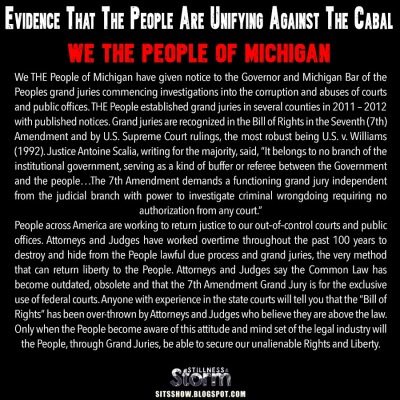 The following are two correspondences, one to the general public and the other is a people of Michigans declaration made as a public notice, appealing to a sense of justice, and desire to make the world a better place. There is a method to offering this information to others I think, compassion is an essential along with empathy. Sacha Stone and the ITNJ panel from last night also discussed the importance of compassion, which I want to expand on.

Often when trying to share information with others they can become defensive, close minded and even combative; especially when dealing with the police. In my observation this is because of a simple fear of the unknown deeply ingrained into the consciousness of humanity. Fear splinters us into boxes of consciousness which begin to feel normal and comforting. We can get stuck in static and limiting belief systems which hinder our ability to seek the truth, allowing it to transform us. As a result, any information which causes us to question a belief can be met with defensive reactions at an unconscious level.

I find that the best approach is to offer the data, and if met with defensiveness, address the emotion before attempting to continue the disclosure; this is where compassion comes in. At a deep level they are unwilling to listen. This free will choice, once recognized by us as the truth revealer, can be honored and we can offer more data once emotions have settled.

Of course when dealing with the police, one needs to be more assertive, and acting without combativeness will stay any reactions against these deeply traumatized and programed individuals. The police and military are heavily indoctrinated and while the law is on our side, acting callously can trigger their training and cause unnecessary harm to one’s self, as we have been hearing about so much of late.

On the other side of the coin, those who are open to the truth, know that something is wrong, but may feel like there is nothing that can be done. This group is where your bravery to share the truth will literally give them the emotional support they need to begin acting on the truth they have been trying to deny themselves. By sending them information like what is presented below, we can offer them a ray of hope, increasing the likelihood they will be open to the truth. That there are people out there building a support network to finally end the madness.
Each person that offers the truth to their loved one, friend, or local government is issuing a vote of non consent, one that was never registered with the corporate government. And slowly lets each of them know they are not alone, and we can work together to take back our lives, and free the planet.

In my awakening experience, I can feel alone and as if no one around me understands the level of pandemic deception and fraud of this world. But if I listen carefully to others and observe them with an open mind, I see that at nearly every level there is a recognition something is not right with this world. Some have long given up hope, but others are profoundly aware and simply lack the knowledge to bravely accept the truth all around them. When I take up the task of sharing of myself openly, often people open themselves to the truth.

Our room mate here in Morocco is one such example. Initially when we would share the truth about corporate government and prolific slavery, he thought it was crazy because he just didn’t have the knowledge to make sense of what we were saying. The truth is like a seed, once planted grows into an idea within our minds, purging falseness when it encounters it, if we are willing to contemplate it consciously. Just recently, he shared with us that he is beginning to see how much insanity is out in this world, and wants to do something to help change things. He said that if it wasn’t for us sharing this truth, and letting him know that others also see the insanity, he would feel like nothing can be done.

10 comments on “Truth and Freedom Advocates, You Are Not Alone”

“I think this fall is going to be a major turning point. You see the SDR (Special Drawing Rights) system coming to a head. The U.S. budget is going to be a very difficult debate. You see the push to get the Trans-Pacific Partnership (TPP) and the EU deal done. You have a lot of institutional relationships that needed to be restructured in the last couple of years. Those changes are all coming to a head, and so we are going to get a big shift. If you are managing a big bond fund, you got a big problem…

There is going to be a turn in the bond market or a plateau, and that’s going to be uncomfortable for those guys, and we are going to see some messy times.” -Catherine A. Fitts