Suspicious Author has Amazing Coincidences or is she an Intel agent attempting to influence public opinion?
Read this:

How do you feel when you wake up in a strange bed in a strange house? A little disoriented, yeah? You’re probably confused at first, then you start to look for ways to make sense of your new surroundings – based on your own previous experience of what’s normal, and the new reality in which you find yourself. Whether your new construct tends more to the former or the latter probably depends a lot on how often you’ve had to go through this process before. Certainly you’ll appreciate any guidance you may be offered by friendly locals. 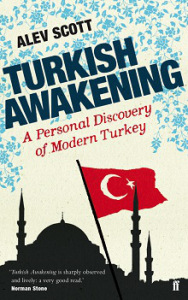 I’m trying to keep an open mind here. A friend loaned me ‘Turkish Awakening’ and I felt a twinge of kindred spirit with an author whose name so resembled my own. On the positive side, I can tell you that Ms Scott writes very…

5 comments on “‘Turkish Awakening’ – A kind of book review”