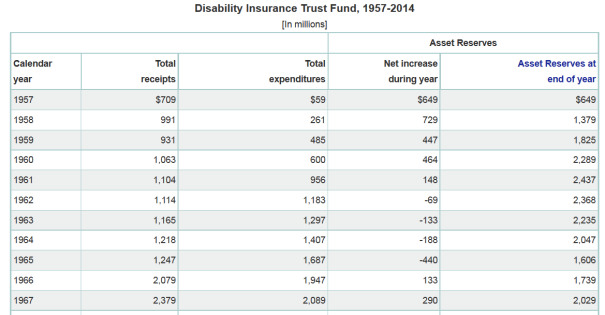 The image above is a cutout of the Social Security Administration’s official website Disability Insurance Trust Fund, 1957-2014 [In millions].
Note what I highlighted and the negative trend of loses since 2008.
Curiously, a negative trend also happened during the early 1960s as well, but then a recovery…

The Disability Trust Fund stood at $50.8 billion as of the end of June 2015.
Projections of the “Disability Insurance Trust Fund” negative trend indicate the fund could be empty in 2017!

… Obviously the data could be spun in a favorable perspective that the negative trend is decelerating, which could be seen as a good thing, however these are huge negatives ($Billions Lost) each quarter for over six consecutive years!
The 1960s negative trend was only four years…

Policy makers say, absent reform, Social Security benefits will be cut across the board by 23 percent in 2035:

Social Security ran a $39 billion deficit in 2014, closing out five years of consecutive cash-flow deficits as the program’s revenues from the payroll tax and the taxation of benefits are falling short of benefit payments. Absent reform, Social Security benefits will be cut across the board by 23 percent in 2035. Action should be taken today to protect Social Security’s most vulnerable beneficiaries from such drastic cuts without burdening younger generations with massive tax increases or unsustainable debt. Lawmakers should immediately replace the current cost-of-living adjustment with the more accurate chained consumer price index; raise the early and full retirement ages gradually and predictably; phase in a universal, flat benefit; focus Social Security benefits on those who need them most; and enable more Americans to save their money in private retirement accounts.

“Late last week, several dozen members of Congress introduced the “One Social Security Act”, HR 3150, to solve this problem.
And let me tell you, their solution is bold. Fearless. And brilliant.

HR 3150 attacks the looming insolvency of Disability Insurance by eliminating the fund altogether.
So instead of having two separate funds for two distinct purposes of Social Security, the legislation aims to combine them into one unified fund.

That way, with just one fund, there won’t be any separate reporting about DI’s insolvency.

It’s genius! They make the problem go away by eliminating the requirement to report it.
There’s just one small issue. Legally, they have a word for this. It’s called fraud.

You and I would go to prison if we commingled funds like this. But in the hallowed halls of Congress, this is what passes as a solution.
This is so typical– solving problems by pretending that they don’t exist and destroying any element of transparency and accountability.” -Simon Black

To keep the Ponzi scheme going – keep raising taxes on Everyone is a certainty.