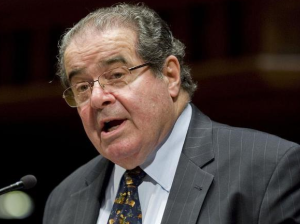 Some individuals will remember his outspoken and candid criticism of the U.S. Government:

“You are kidding yourself if you think the same thing will not happen again,” Scalia told the University of Hawaii law school while discussing Korematsu v. United States, the ruling in which the court gave its imprimatur to the internment camps for Japanese-Americans during World War II.

The local Associated Press report quotes Scalia as using a Latin phrase that means “in times of war, the laws fall silent,” to explain why the court erred in that decision and will do so again.

I only read about Scalia’s death today.
No, the title-question was not rhetorical, and no, I do not know the answer to the question of his sudden death… ~Ron
∴

Even as the cause of death was being announced, a report that the justice was found with a “pillow over his head” was published, citing the eyewitness account of the man who’d hosted Justice Scalia at the ranch where he died.

Yet as details of his sudden death trickled in Sunday, it appeared that the hours afterward were anything but orderly. The man known for his elegant legal opinions and profound intellect was found dead in his room at a hunting resort by a ranch owner.

It then took hours for authorities in remote West Texas to find a justice of the peace, officials said Sunday. When they did, she pronounced Scalia dead of natural causes without seeing the body and decided not to order an autopsy. A second justice of the peace, who was called but couldn’t get to Scalia’s body in time, said she would have ordered an autopsy.

As late as Sunday afternoon, there were conflicting reports about whether an autopsy would be performed, though officials later said Scalia’s body was being embalmed and there would be no autopsy. One report, by WFAA-TV in Dallas, said the death certificate would show the cause of the death was a heart attack. –allenbwest.com

Title: Still Report # 617 – Scalia Died With a Pillow Over His Head
Video posted 15 Feb 2016
“Yesterday about 1 pm, we posted a story that was based off a Fox News story that President Obama might be able to singlehandly appoint a replacement for Supreme Court Justice Antonin Scalia because both the House and Senate are in recess for the President’s Day holiday today.
Although it is true that both houses of Congress are adjourned until next week, what the Fox piece missed – and I failed to catch – was that the U.S. Constitution is very specific in regards to how long a recess appointment may endure:
Article 2, Section 2
“The President shall have power to fill up all vacancies that may happen during the recess of the Senate, by granting commissions which shall expire at the end of their next session.”
Supreme Court judges are appointed for life. So yes, he could appoint a temporary Supreme Court justice, however there would be several downsides to this.
1. Senator Orin Hatch said yesterday that the Senate has tools to prevent this.
2. The other 8 justices on the Supreme Court may simply reject a new temporary member; and
3. This would be seen as merely another Obama power grab and bring on reams of negative publicity raiding down on his languishing administration that would certainly spill over onto Democrats in general.
Bottom line; it’s NOT going to happen, so I took the story down.
Since there is now controversy over the way Judge Scalia died, the removal of the previous video had to be explained.

What is the controversy?
According to the Houston Chronicle in a story written by John MacCormack and updated at 2:40 pm yesterday, Feb. 14th, the resort owner, John Poindexter, knocked on Judge Scalia’s door at 8:30 am when he did not appear for breakfast.
When Scalia did not answer the door, Poindexter assumed he was still asleep.
Three hours later, Poindexter returned after an outing and, finding that the judge had still not appeared, entered his room:
“We discovered the judge in bed, a pillow over his head. His bedclothes were unwrinkled,” said Poindexter.
Poindexter said the body was cold and the judge had no pulse. He called a local doctor and concluded resuscitation would have been futile.