Home › Freedom-Expressed › The More They Are Exposed, The Worse They Act – Get Ready For The Final Act

The More They Are Exposed, The Worse They Act – Get Ready For The Final Act

When I had google accounts, including a youtube channel, I saw this coming along with other infringements on the content providers and users.
In short, the Internet freedom is under assault.
At every turn your privacy and freedom is under attack.
The increase in militarized police, mass surveillance, social programming/engineering, and centralized control is blatantly before us with attempts to engineer worldwide civilization as well as man-made crises.

I know the time consuming effort needed to create video content for any VLOG/BLOG/PODCAST uploads to the internet.
The effrontery of government/corporations to abuse you and your work is too much.
I encourage everyone to consider boycotts and alternatives to google, youtube, facebook, and twitter. ~Ron
. 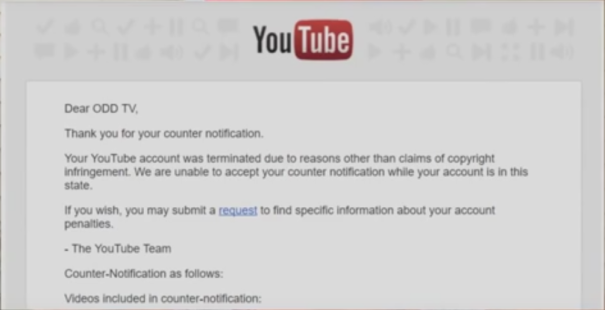 Published on Jul 10, 2016 by Games Exposed
NEW ODD REALITY CHANNEL : https://www.youtube.com/user/MrDoseman
ODD TV CONSPIRACY VLOG : https://www.youtube.com/channel/UCtpfIuNZKBQRQ8WERQVt6FQ
ODD, a good channel that needs our help, they took him down as he was gaining momentum, achieving over 500,000 views on some very sensitive videos !
would have done this video the first day but I really thought he will get his main channel back…

It seems that criticism is not allowed on youtube anymore and FAIR USE is a myth !
Let’s support each other !
Together we are legion !
You can’t kill an idea !

Their Control & Covert PsyOps Is In Entertainment, Marketing, Education, etc.

Title: A video game story | ILLUMINATI & Transhumanism
Video posted 11 Jun 2016 by Games Exposed
This video is about the influence of illuminati in meadia and how a possible goal of the illuminati is to create a transhumanist world where we are more easy to control and turn “off” .

Privacy advocates (that’s establishment speak for “normal human beings”) celebrated earlier this week as the House rejected yet another attempt to expand the Patriot Act’s snooping provisions. House Resolution 5606, better known by its Orwellian name, the “Anti-terrorism Information Sharing is Strength Act,” would have allowed Big Brother to access Americans’ financial information based on what the government deems to be “suspicious activity.” Given that the DHS has labeled such things as using binoculars, paying with cash, or even “appearing normal” as “possible terrorist activity” in the past (thus making pretty much every human being a possible terrorist), everyone can breathe a sigh of relief that the bill failed.

5 comments on “The More They Are Exposed, The Worse They Act – Get Ready For The Final Act”