Home › Freedom-Expressed › A Most Hopeful Effort To Stop The War

A Most Hopeful Effort To Stop The War

“This is Ukraine’s top event for July 2016, overshadowing everything else that goes on.”
.
When I first saw this one, I felt this is very much a key moment for the world.
Recalling that we are all connected, one earth, one people, a collective heart.
I am grateful that “Lada Ray” Shared her comments about this massive public march for peace!

This is Ukraine’s top event for July 2016, overshadowing everything else that goes on. Two branches of the All-Ukrainian Russian Orthodox March for Peace in Donbass started on July 3, one in the east (Donbass), another in the west (Ternopol) of Ukraine. Both marched on foot to Kiev, where they converged and joined forces.

The name for this unique event, which on a smaller scale regularly takes place for special occasions in Russian Orthodox churches, is Крестный ход (Krestniy Khod). However, the size and scope of this particular happening is unprecedented.

Some incorrectly translate Крестный ход to English as ‘a crusade.’ In reality, the right translation would be a ‘peaceful pilgrimage’ with the elements of a ‘march.’  The purpose of such event is multi-prong: to atone for personal and collective sins of humans; to ask for forgiveness and seek god’s and Divine Mother’s protection; to declare the desire for unity and peace.

Technically, initially – some time in 9th-10th century or so – a Catholic ‘crusade’ did signify the same as Крестный ход. However, the meaning of a crusade was irreparably tarnished as a result of aggressive Crusades by violent Western/Catholic knights against Jerusalem, Constantinople, Middle East and Russia with the expressed purpose of looting and conquest. Therefore, the word ‘crusade’ acquired a decidedly negative and derogatory connotation.

However, there is a breakaway branch of ‘Ukrainian Orthodox Church,’ unrecognized by other Orthodox Churches and world religions. There is also a very confusing ‘Greek-Catholic’ Church, primarily in Western Ukraine, where the Vatican penetrated when those territories belonged to Poland and Austria-Hungary. The latter is essentially Catholicism with some Orthodox stuff thrown in to camouflage its real essence. Both of these have been thriving and greatly expanding since 2014 Kiev coup. They both support the ‘right sector’ and Bandera ukro-nazis; both are Russophobic. Neither of these two were a party to this All-Ukrainian march.

There is a big problem in Ukraine with these two breakaway (shall we call them separatist?) religions: using nationalists and ukro-nazis, they attack regular Orthodox churches and monasteries, beat up, kill or expel Batyushkas (priests), threaten congregations and take over such churches for themselves. The problem is being silenced or quietly supported by Poroshenko and his junta. Russian State and the Russian Church have been trying to appeal to Catholic and other religions, as well as to Western leaders to help restore justice. The West – as usual – is silent.

There were many threats against this All-Ukraine March for Peace, and not only from ukro-nazis, but also from Ukraine government officials. Ukraine’s minister of interior Arsen Avakov and his advisor Gerashchenko posted threats against march participants on their Facebook pages; recommendations to attack and kill the marchers sounded from some Ukraine parliament deputies. Rotten eggs were thrown, fake bombs were set up on the way. Odessa pilgrims were threatened to be BURNED ALIVE inside buses they were boarding to get to Kiev (recall Odessa May 2, 2014 Kulikovo Polie tragedy when people were burned alive)! Attempts to intimidate pilgrims, disrupt the march and block it from entering Kiev were made by ukro-nazis from fascist OUN/UPA.

A couple of days ago: Bandera OUN/UPA ukro-nazis try to block Khrestniy Khod near Kiev

This Khrestniy Khod is a huge event, coinciding with a major Russian Orthodox holiday today, July 28. It is usually celebrated by lavish services and prayer on Vladimirskaya Gorka (Vladimir’s Hill) and in Kievo-Pecherskaya Lavra – the most sacred and original monastery of Russian Orthodoxy. Both of these are Kiev’s most famous landmarks. Moreover, the main street of Kiev is called ‘Khreshchatic,’ loosely translated as ‘The Way to Christening.’ It was through this main road of the ancient Kievan Rus’ that Knyaz’ Vladimir and others marched to the shore of the River Dnieper, where they were christened and converted into Orthodox Christianity.

To be sure, Knyaz’ Vladimir himself first took Christianity prior to that in Crimea. However, at the time there was no such name; the peninsula we today call Crimea (in Tartar: Krim) was called Tavria or Tavrida. Incidentally, there are calls to return its ancient historic name. 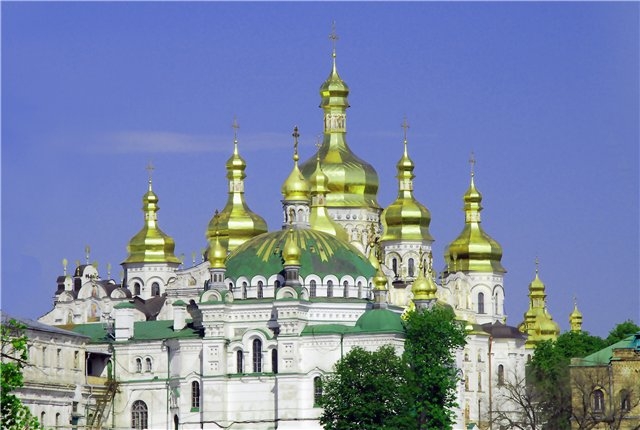 Above: The views of gorgeous Kievo-Pecherskaya Lavra, UNESCO World Heritage site and Kiev’s most famous landmark

Therefore, no matter how much they try to deny it, Kiev’s history and today are intrinsically connected to Rus’ and Russian history. (Read the complete story in ESR2: Ukraine Truth, Lies & Future Hope). 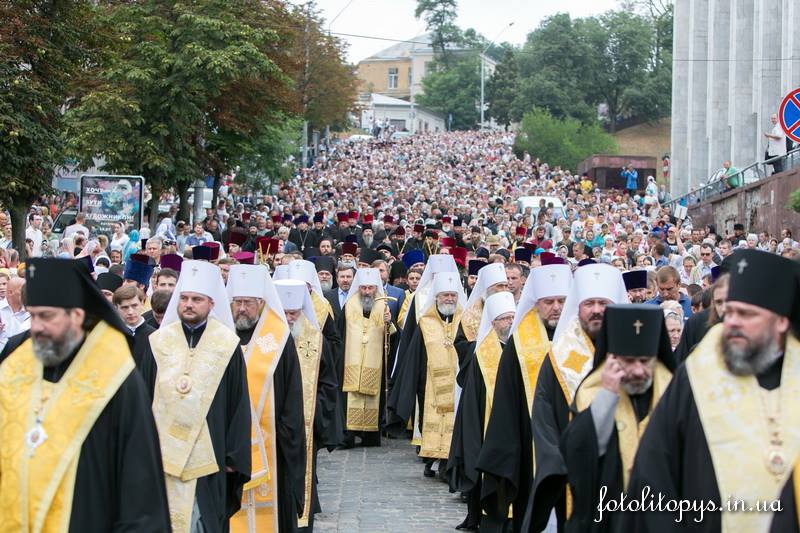 It turned out that 2016 Orthodox March for Peace in Donbass, culminating in the convergence of the Western and Eastern Ukraine on Vladimir’s Hill and Kievo-Pecherskaya Lavra, was too big of an event to quietly sabotage or kill off its participants, as junta and ukro-nazis initially intended. Its slogan for peace and its unifying spirit caused enough international resonance that Kiev dared not. Neither US, with its protests against Clinton/DNC, nor Merkel or Hollande, with their countries on the verge of explosion, could afford violence against peaceful pilgrims. Poroshenko received orders from his Western bosses to do everything in his power to cool hot heads and protect the march.

Ukraine’s National Guard, initially created in 2014 to fight against the people of Donbass and to squash any descent in Odessa and Kharkov, was called in to protect the pilgrims. Meanwhile, observers noted that Kiev became strangely deserted as various junta bosses and ministers ran for cover. Some were seen at their villas somewhere in Italy or France, others simply left the city.

These are videos of yesterday’s march: a sea of people moving through the streets of Kiev! Notice that the religious singing is in Russian.

While the dark forces that took over Ukraine ran to their Mediterranean villas or hid in their holes, an extraordinary situation took place in Kiev as one hundred thousand people joined the march through its streets. Previously, ten thousand joined the march when it traveled through Kharkov, and thousands joined it in every town and city it passed. In every town, including Kiev, volunteers cooked free meals and prepared tea for pilgrims. Kiev, for the first time since the bloody February 2014 coup, turned into a city of peace and unity. Observers noted that the energy during the march was incredibly high. And they are absolutely right.

I can quantify this mystical energy surge for you through my Quantum Calibrations. The miraculous transformation is particularly striking if you compare yesterday’s energy to the energy of Kiev just two weeks ago:

Of course today the energy is already much lower than yesterday, but it’s still a huge leap compared to what it was before. However, to maintain high energy, it has to be reinforced day after day, while energetic debris is systematically cleared. Alas, once all that filth and debris that temporarily deserted Kiev returns back, it will fall into grief yet again. But here’s the good news: once the crack in the armor appears, it’ll continue growing. As I’ve predicted since 2014, eventually people will recall who they really are. Eventually, the amnesia induced by severe brainwashing will dissipate and Ukraine will turn around.

The most significant lesson shown by this Gandhi-like non-violent march is that the only thing that can unite the disparate and antagonistic sides of Ukraine is Russian Orthodoxy, based on Rus’ heritage and Russian language. This result is visible to all and it will be very hard to ignore. This message is in total contrast to the values of Ukrainian nationalists and Kiev junta, and it will be heard regionally and globally.