Home › Freedom-Expressed › Are You Ready For Monetary Reform?

Are You Ready For Monetary Reform?

I am experiencing difficulty typing today, therefore I will direct your attention to recordings from others preparing for the full implementation of monetary reforms by the banking industry (i.e. FSB, IMF, G20, and other organizations that collectively manage the worldwide monetary system).

For those who would like to review the actual text of the new U.S. pension regulation, here it is: savings-arrangements-final-rule

“This year is the first for China to hold the G20 presidency. It is also the first time for the G20 Finance Ministers and Central Bank Governors Meeting to be held in China.” –H.E. Li Keqiang Premier of the State Council of the People’s Republic of China 26 February 2016

– This is important –
China is hosting the G20 Summit this week 29 Aug 2016. Heads of State are now arriving, the main agreement signing is on September 4-5, the 11th G20 Summit will convene in Hangzhou, China. The theme for the Summit is:
“Toward an Innovative, Invigorated, Interconnected and Inclusive World Economy”.

The G20 has become the key vehicle for implementing and promoting global economic governance.
Leaders from G20 member-states, guest countries, and heads of international organisations will attend. President Xi Jinping will chair the Summit and participate in a series of related activities.

Everyone’s bank & investment accounts, retirement and pension funds will be affected by the monetary reforms (away from unipolar-dollar to a multipolar reform) causing currency values to change drastically.
I remind you to expect their forceful efforts for monetary reform to be in place by the end of 2018.
That is why many expect big events in the weeks and months ahead.
How successful the money mafia will be, is another discussion that would include war, debt defaults by individual nations, development plans, and other opposing efforts.
Remember, “It is not an accident, it is Policy.” ~Ron
§

Governments are beginning to depart from the grip of austerity forced upon Europe by Merkel which has greatly suppressed economic growth and created an economic depression exactly as what took place during the 1930s. The option of deliberately creating deflation was the policy of Germany only because they misunderstood the causes behind the German hyperinflation of the 1920s. The failure of the economy to rebound in Europe and in Japan, while the United States has been only a dead-cat-bounce, led to governments insisting politically that central banks maintain and extend their own stimulus efforts.

It is clear, central bankers are in a state of panic. They are looked upon as the sole economic magician and this political shift for responsibility has overburdened then dramatically. They know all too well that serious structural reforms are now necessary. However, central bankers can’t be seen to be giving up on this Keynesian/Marxist policy Volcker called the “New Economics” and Larry Summer pushed to Negative Rates. They are now trapped, unable to reverse policy without sending a signal that they’ve have failed. The great fear is the collapse in confidence, which is on the horizon. –Armstrongeconomics.com

There’s a consensus, [Paul Martin] suggested, that the World Trade Organization shouldn’t be written off the way it has been in recent years — and that the central banks have gone as far as they can go with monetary policy “without the fiscal side playing its role.”

In advocating for support for these and other multilateral institutions, Trudeau has an opportunity to “play the leading role in making globalization work,” Martin said. –nationalpost.com

A rise in the dollar is the key to the Sovereign Debt Crisis. Now, even the Bank of International Settlements is starting to warn that there are so many loans in dollars outside of the USA, which were originally to save on interest way back when, that a rise in the value of the dollar will cause a cascade failure in sovereign debt, especially among emerging markets. There may be the skeptics out there who think we are just making a lot of noise, but those in high places pay attention to our models no matter what the critics think. A strong dollar is the lynchpin that unravels everything. This is not about gold or hyperinflation. Clearly, those people lack any comprehension of what is unfolding on a global scale.

Central bankers are trying to keep the dollar from rising. This is what has been going on. They are fighting tooth and nail against the trend, but our computer says they will lose. The ECB’s insane policy of negative rates is tearing Europe apart and we can look at the raw capital flows to see how the peripheral economies within the Eurozone are moving to hedge the failure of the euro. The European banking crisis is beyond contemplation. The main central banks are selling Treasuries while the peripherals are buying. Just open your eyes and forget the propaganda. –armstrongeconomics.com

Already, the weak minded are moving to government-only funds that will just be like the Japanese funds were who hid any losses. The accounting will assume you have lost nothing as long as it is government paper. Investors are being told already that their money market funds restricted to government paper are 100% safe and will always return their money. The floating NAV values for all other funds are risky. 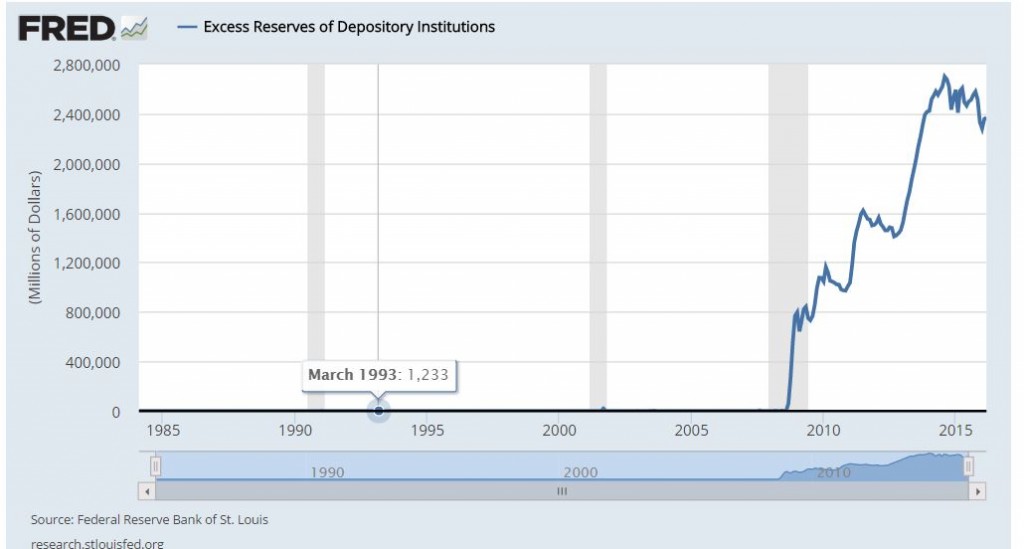 What is happening is very clear, almost $500 billion has moved from money market funds into government funds. Total assets in money market funds have now dropped below $1 trillion for the first time in 17 years. This is very bad for it will enhance the economic decline when banks are already not supporting the economy and hoarding cash deposited at the Fed in its Excess Reserves facility.

Despite the hoopla that sales of US Treasuries are signaling that the end is near, to the contrary, the landscape is changing already and the new rule has not yet gone into effect.

9 comments on “Are You Ready For Monetary Reform?”