Please keep in mind that our discussions here treat ALL news reports from mainstream mass media as rumour and propaganda until documented evidence is available to verify.
News media is shared to reveal what opaque agendas are being implemented on the unsuspecting masses. Citizens are the last to know what really is happening, and the news is there to keep it that way.
A ongoing world war campaign has been escalating since the “War on Terror” was announced on 11 September 2001 (9/11), thus after that mass deception was perpetrated via mass media news we have learned to question all official reports for their deceptive motives in the search for the truth.
A major event (false flag, or not) could be used in an attempt to justify formal war declarations.
With that disclaimer in mind, please discuss all military activity below. ~Ron
§

In this episode of Newsbud Roundtable, Sibel Edmonds, James Corbett, and Professor Filip Kovacevic join Spiro Skouras to discuss what is being called the ‘worst humanitarian crisis’ of our time. Our team takes a peek behind the curtain to find the root causes for why and how millions of people are migrating from war torn countries, and who benefits. We also examine the history and context of synthetically-created refugee crises since 1951. Join this highly stimulating discussion, and bring in your thoughts and responses with your comments.

WAR Is A Racket…

“You control the debt, you control everything.
[…] This is the very essence of the banking industry: To make us all slaves to debt.” 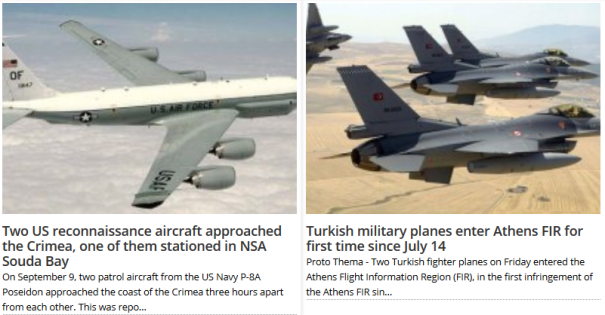 Is this a military conflict brewing between Greece and Turkey?

Turkish fighter jets entered Greece’s air space Wednesday [19 Oct 2016], prompting the response of two Greek aircraft, and leading to a dogfight between the two sides, the first such incident of its kind since a failed military coup in Turkey on July 15.

Two Turkish F-16s violated Greek air space southeast of Rhodes and south of Kastellorizo shortly before 4 p.m. and were pursued by two Greek fighter jets dispatched from a base at Souda Bay, according to Defense Ministry officials. A separate pair of Turkish jets then entered Greek air space and engaged in a dogfight with the Greek aircraft. The Turkish jets were all armed, according to defense officials.

Greek-Turkish relations have been strained in recent weeks following comments by Turkish President Recep Tayyip Erdogan and other Turkish officials questioning international treaties that establish the borders between the two countries. A misinterpretation, however, of more recent comments by Erdogan, which suggested that he had called for a referendum in the Greek region of Thrace, needlessly aggravated the situation. …Read more.

Aleppo, SANA – In a new act of aggression on Syria’s sovereignty, the Turkish regime’s forces penetrated into the Syrian territory on Saturday evening and …Read more.

Turkey Warns World War III May Erupt as a Result of Russia-U.S. Tensions Over Syria

Turkey’s army is providing cover to Daesh militants during their attacks on Kurdish forces in the north of the Syrian province of Aleppo, Kurdish politician and …Read more.

Pentagon: Turkey Not Included in Air Operations in Mosul

U.S. Central Command (CENTCOM) said on Wednesday that Turkey is not involved in the U.S.-led anti-Daesh coalition’s air operation in Iraq. The statement differs from the Turkish Defense Minister Fikri Işık’s announcement yesterday that the Turkish military and the coalition had reached an agreement to utilize the Turkish Air Force to target Daesh positions in …Read more.

Turkey has reportedly invited Russia to bid on an air defense system that has become a sort of geopolitical bellwether, suggesting that Ankara may be using its rapprochement with Moscow to send a message to its Western partners. On October 10, Russian President Vladimir Putin made his first visit to Turkey since the two countries fell out …Read more.

Bulgarian customs officers have seized 29.785 kg of heroin at the Malko Tarnovo checkpoint on the country’s border with Turkey, authorities said Tuesday. The illicit drugs, split into 56 packets, were found on Monday in a car entering from Turkey, the country’s Prosecutor’s Office said on its website. The driver of the vehicle, a Turkish …Read more.

Putin-Lavrov Warn the U.S.-NATO: “We Will Not Back Down!”