Is The U.S. Dept Of Homeland Security (DHS) Criminally Guilty Of Attempting To Crack Into Georgia’s Secure Election Database?

– Institutional Crime –
Do you remember our discussion about the BIG CRIMINAL LIST?
Or the event where all the judges from the entire California Court had to step down…

You should be aware of the deception in the massive national campaign to secure the U.S. presidential selection con-game by Homeland Security Secretary Jeh Johnson during the height of the Russian fear mongering.
Remember the Aug. 15 call with state election officials, he offered states DHS services that would inspect voting systems for bugs and other hacker entryways. Earlier in the month, he also suggested the federal government label election systems as official U.S. critical infrastructure, like the power grid.

In what appears to be another case of criminal agencies or elements within government, the DHS is accused of attempting to break into the State of Georgia secured election database. 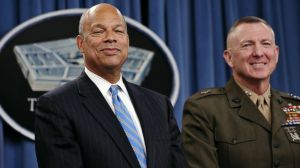 Jeh Johnson is pictured on the left.

The charge was leveled against the organization by Georgia’s Secretary of State Brian Kemp in a letter sent to Homeland Security Secretary Jeh Johnson on Thursday. “On November 15, 2016, an IP address associated with the Department of Homeland Security made an unsuccessful attempt to penetrate the Georgia secretary of state’s firewall,” –breaking911.com 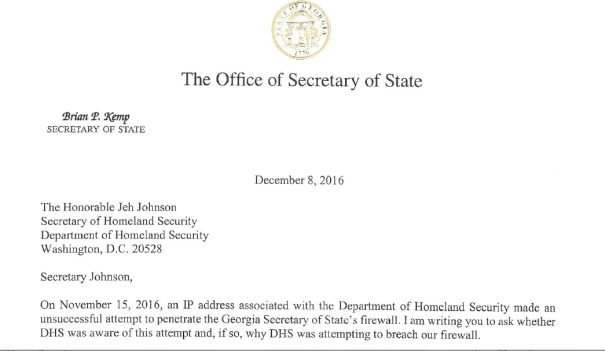 You can download the official letter here:
https://assets.documentcloud.org/documents/3234551/Georgia-Secretary-of-State-Letter-to-DHS-Secretary.pdf
This crime story is not only intriguing but may also have legs as the implications are large and potentially connects to many offices and jurisdictions.
A few news links are supplied below, but search the internet as this crime story is gaining public attention and requires the People’s Truth Seeking scrutiny.  ~Ron

theepochtimes.com reported:
The Department of Homeland Security (DHS) may have ordered the attempted hack into Georgia’s election database, according to a Thursday report from the Wal. … Georgia was one of two U.S. states that didn’t accept the federal agency’s help to secure its election-related systems. … Crime and Incidents.
Read more…
∇

breaking911.com reported:
Kemp, who sits on the DHS Election Cyber Security Working Group, said he was “very concerned by the incident.”  Homeland Security spokesman Scott McConnell said the department got Kemp’s letter and is ‘looking into the matter.’
Read more…
∇

Why does DHS want to designate election booths ‘critical …
Aug 17, 2016 … Johnson told reporters in Washington (and state officials in a phone call on Monday) … frustration over the 2013 Shelby County decision by the U.S. Supreme Court, … In fact, Richard Pilger of the Election Crimes Unit of the Public Integrity … But Georgia Secretary of State Brian Kemp was very vocal in the …Read more

Question Authority and THINK for yourself

One comment on “Is The U.S. Dept Of Homeland Security (DHS) Criminally Guilty Of Attempting To Crack Into Georgia’s Secure Election Database?”