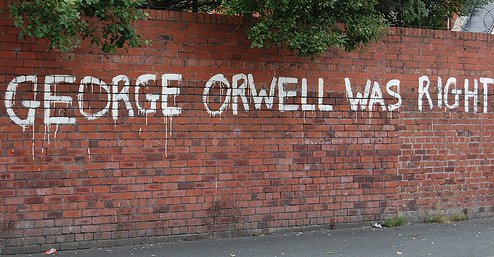 The political agenda could be to abolish all opposing views and narratives under the guise as “anti-propaganda” and “real news” when actually the corporate sponsored media is propaganda and has fake news with crisis acting.

That was predicted by George Orwell, and now the Russophobia campaign is underway, could legislation for thought crimes be coming soon?
We have often discussed the evidence that compulsory schooling, mass media, and formal religion have been part of the broader state sponsored social engineering program. ~Ron

Pope likens fake news to eating feces!
7 Dec 2016 Potty mouth, Pope Francis on Wednesday warned about the dangers of fake news — likening it to “the sickness of coprophilia,” or eating feces… Clearly, fake news left him with a bad taste in his mouth… read timesofisrael.com

“One of the biggest roles of science fiction is to prepare people to accept the future”… –Sir Arthur C. Clarke

Title: The Abnormalization of Dissent
Video posted 13 Dec 2016 by corbettreport

The spin, lies, manipulation and deceptions are coming so fast and thick it’s increasingly difficult to document them all, let alone analyze them. But in the broad sweep of recent events we can see a common theme emerging: the abnormalization of dissent.
And when political ideology boils down to nothing more than “real” and “fake” the control of political discourse through language itself is almost complete.
Can outright censorship be far behind?

What I Learned From the Prop or Not Propaganda List

6 comments on “Not A Coincidence: Both EU Parliament and U.S. House Pass Bills Targeting Alternative News”