What is beyond the south pole?
Hmmm… looks like a mission for Operation High Jump! 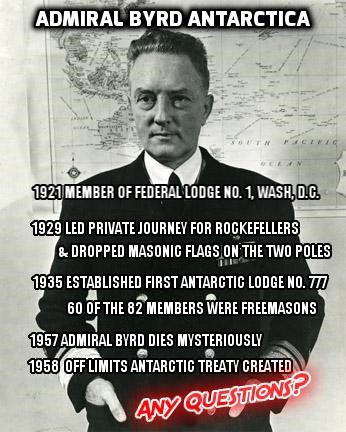 Immediately upon returning on his first ever expedition to Antarctica in 1927, Admiral Richard E. Byrd (October 25, 1888–March 11, 1957) delivered some 27,000 documents and transcripts to the sponsor of his private sojourn, JD Rockefeller, the wealthiest man on Earth at the time. These papers have never been revealed to the public about what he discovered.

Admiral Byrd was a known 33-degree Freemason, and in 1935 he went down to Antarctica where he established the first Freemason Lodge, New Zealand Lodge 777. Immediately after WWII the US Navy Brass unexpectedly rushed launched the largest military operation ever down to Antarctica called Operation High Jump. Admiral Byrd led the expedition of 30 ships and 4700 militarized soldiers (He also led some of the first expeditions to the North Pole.) The Antarctic mission had 3 task forces that were sent out in different directions and was to last 6-8 months.

Two weeks before leaving on this massive rushed operation immediately after WWII, the commander of the expedition, Admiral Richard Cruzen, commander of the flagship, Olympus, complained to Admiral Byrd he knew nothing about the mission or supplies needed for his men just two weeks before departure. Ships had to be recommissioned, including the rushed shakedown of the new aircraft carrier, the USS Philippine Seas, among the largest carriers of the time. The main force was divided into three groups. The Central Group comprised of the USS Mt. Olympus (communications); USS Yancey (supply); USS Merrick (Supply); USS Sennet (submarine); USCGC Burton Island (Icebreaker) and USCGC Northwind (icebreaker).

Operation High Jump went down with specially equipped rockets, cranes and snow machines to traverse over the 150 + tall ice walls to venture deep into the Antarctic region yet failed completely on their mission as many of those exploring died when their planes went off course and crashed when equipment failed likely due to the heavy electromagnetic fields from the dome. The mission was to last 6-8 months but in just six weeks the entire fleet had bugged out back to the states… Read more at aplanetruth.info

What do the financiers for the International Geophysical Year (IGY) and the Antarctic Treaty System (ATS) know about the Antarctic secrets?

The Antarctic Treaty (ATS) was signed in Washington, DC on 1 December 1959 by the twelve countries whose scientists had been active in and around Antarctica during the International Geophysical Year (IGY) of 1957-58 and entered into force in 1961.

WHO ARE THEY, to keep secrets and restrict access to a region on the earth?

Do you blindly TRUST them to keep secrets in your best interest?

In the videos below there is a wealth of information about the mystery and secrecy in Antarctica, let’s dive in.

*** Clif High has photographs of massive pyramid in Antarctica! ***
But he can’t show them to you…

Antarctica Has Strange Visitors and invites much speculation:

Title: Uhm… British Scientists are looking for WHAT in Antarctica
Video posted 10 Feb 2017 by UFOmania – The truth is out there

In a staged televised interview (Longines Chronoscope), Admiral Byrd was asked about unexplored regions on earth, he replied:
…”not up around the north pole, it’s getting crowded up there now because they found out it is really usable – not only to live, but militarily. But strangely enough, there is left in the world today an area as big as the United States that’s never been seen by a human being. And that’s beyond the pole, on the other side of the south pole, from ‘middle America’.”

Was Admiral Byrd telling the world that vast unexplored territory as large as America (roughly 2,427 miles) is on the other side of the south pole?
Also, was Byrd referencing some region in the middle of North America, or the Middle America Trench (a submarine depression in the Pacific Ocean off the western coast of Central America)?
The major point for me is that land is unexplored and Admiral Byrd did not say it was merely more ice!
Yet, the educational system and mainstream media wants everyone to believe Antarctica is like an inhospitable Ice-island-continent to be flown over, as a short-cut, to reach the other side of a spinning ball earth.