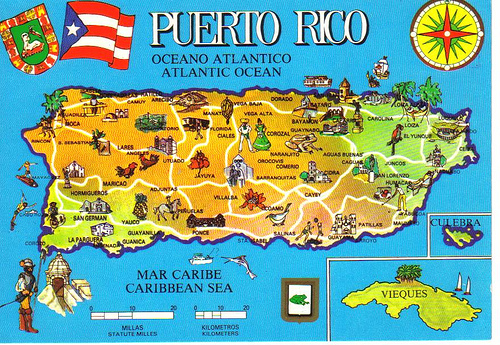 Tempers are flaring in Puerto Rico as the puppet governor (Ricardo Rosselló) is seeking protection with bankruptcy and austerity.
Recently, a peaceful protest (largely students) broke into violence and arrests when (allegedly) undercover provocateurs caused the riot police to pepper-spray protestors.
Later the governor has been on TV in support of policia enforcing policy and austerity policies.

Lawyers for Puerto Rico’s government are drafting a forbearance agreement that could allow the U.S. territory to avoid invoking bankruptcy protections in the short-term, two sources with direct knowledge of the discussions revealed to Reuters on Friday.

Puerto Rico and its creditors wrapped up roughly a week’s worth of mediated talks in New York, aimed at striking a deal to restructure much of the $70 billion in debt the island cannot pay.
…
It remains unclear if creditors would support such an offer to extend talks past a May 1 deadline to reach an agreement. After that date, Puerto Rico could face lawsuits from creditors or seek a court-sanctioned restructuring process akin to U.S. bankruptcy, a provision of the 2016 rescue law known as PROMESA.

One of the sources said a government attorney with O’Melveny & Myers informed some creditors the government’s legal team would circulate a draft forbearance agreement, and would be in touch in the coming week about scheduling new mediation talks.

The sources requested anonymity because talks are private.

Puerto Rico’s financial team is due back on the island next week as its prepares a budget for the federal financial oversight board that is due by April 30, [2017].
…Source: Reuters

Puerto Rico’s economic and fiscal crisis requires a broad restructuring of Puerto Rico’s fiscal infrastructure. An effort imposed from the outside without the participation and conviction of Puerto Rican residents runs the risk of being rejected by the country’s citizens.