7:03 AM 4/29/2017
1st Quarter 2017 Review: Below are my thoughts considering NEWS Reports as I contemplated the approaching institutional (engineered) crises.

Isn’t this rather odd:
03 May 2017 The Federal Reserve will have another meeting, but NO press conference after the meeting!!!

I see evidence of manipulated markets:
(keep a watch on 10-year Treasury yields, and other government bonds world wide, and remember the Federal Reserve want to legally buy corporate stocks – probably means they already are doing it illegally….)

*Please remember this: institutional investors are not allowed to park funds in physical gold or silver.

(buying the corporate stocks such as mining companies and futures paper trades is accepted) So this is managed risk for all pension funds, worldwide risks for all retirees.

But, Exchange Markets continue to soar as physical economies wither away.
Obviously, because the capital flow is mandated to keep the markets rising, in my opinion. But mass media is not trumpeting the insiders are selling stocks and this should be an alarm signalling what is to come.

The recent IMF & World Bank Spring Meeting painted a rosy global economy picture as the official report for the condition of the world.

Those are reasons to not expect hyperinflation, because callous banksters are crafty financial engineers and expert deceivers! 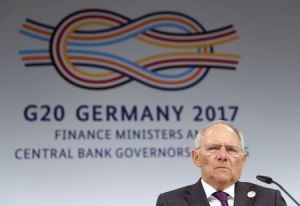 – Pennies on the Dollar! –
The banks are not lending to the real economy and they are poised to repossess physical/tangible assets after the next collapse and round of bankruptcies…

A bank savings account-holder would be lucky to get (after bank fees) 0.03% on deposits or CDs @ 0.25-1.96% (varies with amount and term length, generally credit unions have best deals);  but go to get a car loan and you must pay 3%-4.91% or more; look into credit cards after the 0% incentive introduction and the rates varies between 12-24%!!!

Savers are losing the value on their deposits to inflation, fees, and taxation.
Wealth redistribution is in full swing!
∇

Germany’s DAX (Euronext Paris: .FCHI) broke through its all-time ceiling after centrist Emmanuel Macron pulled in the highest number of votes among candidates in the first round of the French presidential elections.

U.S. equity futures also surged on Monday as the NASDAQ opened at fresh record highs and the Dow Jones industrial average soared by more than 200 points.

This as the Stoxx 600 index of the largest listed European companies moved up over 2 percent on Monday.

A favorite tool of the policy makers is to engineer the crisis and later offer the solution amid the suffering!
Imagine, the next financial collapse has the international emergency summit convene to offer blockchain based cryptocurrencies, digital RFID credit and debit cards and a host of other mandatory policies and central authority bodies for a stable and sustainable global economy!

Governments with mountains of debt are resorting to tax hikes and austerity policies.

Brazil’s Michel Temer deplores violent protests, says to press ahead …
Temer criticized demonstrators who blocked roads and prevented workers from reaching their jobs during the one-day strike against his proposals to reform …
http://indianexpress.com/article/world/brazil-michel-temer-deplores-violent-protests-says-to-press-ahead-with-reforms-4632659/

– Personal safety and economic problems are very serious in Venezuela.
Many have left Venezuela as many more wish they could…

Venezuela is the second most violent country in the world, according to the Venezuelan Violence Observatory, with this extreme institutional crisis I ponder how long before the Maduro government is ousted.

The citizens failed in their attempt to overturn President Nicolás Maduro in a political referendum, then they attempted the call for general elections with demonstrations that have left 28 dead, hundreds injured and arrested in a month.

Who would bet against regime change in Venezuela?
Who believes the Maduro government can solve the crisis?

According to FORBES.com, “dwindling central bank reserves of … The political crisis is forcing foreign oil firms to recall their workers.”
Read: http://www.forbes.com/sites/kenrapoza/2017/04/25/for-bond-lords-assessing-the-possibility-of-a-sudden-shock-to-venezuela/

Venezuela began the process of formally quitting the Organization of American States (OAS), after branding it an “interventionist coalition” for pressuring President Nicolas Maduro over a deadly political crisis.

The thick steel door with welded reinforced plates being installed at Yadira Castro’s small shop seems like it might be more appropriate for a prison or a bank.

But after looters recently rampaged through her neighborhood, pried her door open and emptied her store of snacks, bread and cigarettes, what might be seen as overkill anywhere else is the reality of being a Caracas merchant.

“What I built over two decades, an entire life, was destroyed in a day,” she said.

…Look around the world and see a crisis brewing (Puerto Rico, Greece, and elsewhere…).
Detect mass deception coming from mass media and institutions!

You can see all the above and more, if you are not distracted by corporate mass infotainment nor deceived by official Orwellian newspeak and propaganda.