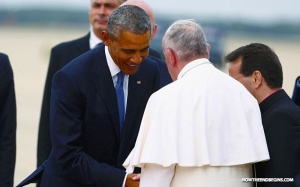 – Satan, The Prince of This World –

What will truth seekers find researching this Age of Deception?
There are secret organizations that worship Satan with members in religions, governments and mega-corporations…

The Pope and the Pontifical Academy recently hijacked the news with this new campaign against freedom: “I cannot fail to speak of the grave risks associated with the invasion of the positions of libertarian individualism at high strata of culture and in school and university education,” the Pope said in an message sent to members of the Pontifical Academy of Social Sciences meeting in the Vatican.
…Read scathing assault on libertarians. 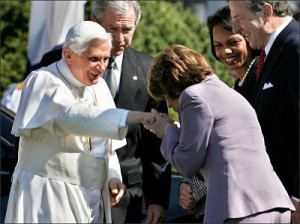 Is Lucifer “the ruler of this world”?

…and his handiwork is hiding in plain sight?

Jeff Berwick aka The Dollar Vigilante exposed pope Francis and alerted us to this latest worldwide campaign against freedom and truth.

Title: A Response to Pope Francis’ Attack on “Invading” Libertarians
Video posted 02 May 2017 by The Dollar Vigilante

And false teachings!
As long as Jorge Mario Bergoglio, aka Pope Francis, is campaigning against truth, it should be noted that the Vatican and the Jesuit order is a secretive and deceptive organization:

Title: Pope Francis, The Vatican and The Antichrist.
Video posted 15 Nov 2016 by

Seek the truth and Dig Deeper into the Vatican activities:

Forbidden Knowledge?
Look and tell me what you see:

Okay, Jorge Mario Bergoglio is a strange guy and he makes for a strange Pope, but keep digging for the truth because it gets worse:

The word “Vatican” literally means “Divining Serpent,” and is derived from Vatis = Diviner and Can = Serpent. Vatican City and St. Peter’s Basilica were built on the ancient pagan site called in Latin vaticanus mons or vaticanus collis, which means hill or mountain of prophecy.

One World Religion:
Pope Francis is campaigning to unite all the world religions into one.
What about the bible’s parable to separate the tares from the wheat?
There goes the scriptures considered holy writ.
There goes the covenant with God along with his commandments…

Title: POPE FRANCIS AND THE ONE WORLD RELIGION
Video posted 27 Sep 2016 by RichieFromBoston

In the video the speaker told his christian congregation “the protest is over” Goodbye to the Protestant Reformation and the personal/spiritual relationship from focused bible study, meditation and prayer.
Hello to rituals, dogma, and institutional governance.
Basically that means accept the Vatican’s leadership.
Bible study would reveal this as Apostasy, to turn away from the biblical teachings.

Do you wonder where worshiping Luciferians are?
Isn’t it strange that the Vatican named its most advanced telescope LUCIFER?
Aren’t you curious why Pope Francis isn’t campaigning against worshiping Lucifer?
Not a campaign against the Arch of Baal (triumph) erected in major cities (such as London, NYC, and others) – Why Not?
Not a word against the demonic ritual (that was called a opening ceremony) for the CERN’s Gotthard Base Tunnel – Again, Why Not?

“…have no fellowship with the unfruitful works of darkness, but rather expose them. – Ephesians 5:11”

Who should expose the darkness of this world and spiritual wickedness in high places?

If you want to obey a Pope/King then at least see some of what that kingdom is.
Conclave 2013:

The Only Absolute Monarch in the Euro:

Hear the WORDS in this ceremony to induct 2 popes into Sainthood April 27th, 2014 during a ceremony for Pope John Paul the 1st and Pope john Paul the 2nd.
The quote from the ceremonial Mass:

“His flame dawning his own son
May, I say to you O’ Lucifer who knows no setting
Christ is your son who came back from the dead
and shed his light to the human race
and is alive and reigns for ever and ever”

Title: Vatican Veneration of The Dragon Behind Closed Doors
Video posted 19 Aug 2011 by Awakened2Truth – Disciple of Jesus the Christ

But many are unaware of this.

Look into the Vatican’s past and current turmoil:

The Jesuits and the Vatican deception & secrecy is a deep, dark, and horrific pit deeper than the dungeons and catacombs.
A few more trails for researchers and bible scholars to dive into are:

8 comments on “Pope Francis Campaigns Against Freedom and Libertarians”