… Observing current world affairs and mass media we witness strange activities. The topics below may appear to be unrelated but they are connected in this Age of Deception.

With the comprehension that this worldwide monetary system was engineered as a unstable debt based system (think Ponzi scheme with the populations of nation states as “human capital”) with the power of mass media to control the narrative (confidence stories), with education to indoctrinate, and privileged central banks to issue unlimited sums of national currencies (loans) then you begin to notice the details in the globalization scheme.
…

With the understanding that the MSM mass media is there to control the narrative (propaganda tool) these stories are curious to say the least:

“The question is whether this is just happening now, or will it escalate?” said Aschim. The Svalbard archipelago, of which Spitsbergen is part, has warmed rapidly in recent decades, according to Ketil Isaksen, from Norway’s Meteorological Institute.

Aschim said there was no option but to find solutions to ensure the enduring safety of the vault: “We have to find solutions. It is a big responsibility and we take it very seriously. We are doing this for the world.”

“This is supposed to last for eternity,” said Åsmund Asdal at the Nordic Genetic Resource Centre, which operates the seed vault. –zerohedge.com

Title: It appears the food supply will be coming to an END (trending)
Video poste 19 May 2017 by RichieFromBoston

Meanwhile, central banks and policy makers, with a sense of urgency, plan (as if they know catastrophes are coming – which is likely because a covert faction are likely staging the events) to enforce new rules and policies for:

In the April 2017 “Global Financial Stability Report,” IMF researchers reported:
“The [U.S.] corporate sector has tended to favor debt financing, with $7.8 trillion in debt and other liabilities added since 2010…”

In another segment the IMF report said:

“Corporate credit fundamentals have started to weaken, creating conditions that have historically preceded a credit cycle downturn. Asset quality—measured, for example, by the share of deals with weaker covenants—has deteriorated.”

“At the same time, a rising share of rating downgrades suggests rising credit risks in a number of industries, including energy and related firms in the context of oil price adjustments and also in capital goods and health care. Also consistent with this late stage in the credit cycle, corporate sector leverage has risen to elevated levels.”

The SDR was praised for its ability to be a catalyst for international loans during the IMF spring panel discussion.

The panel discussion was moderated by Maurice Obstfeld, an established academic who serves as a Director of Research at the IMF. Obstfeld is connected, knows the right people, and can see the macroeconomic implications of SDRs. 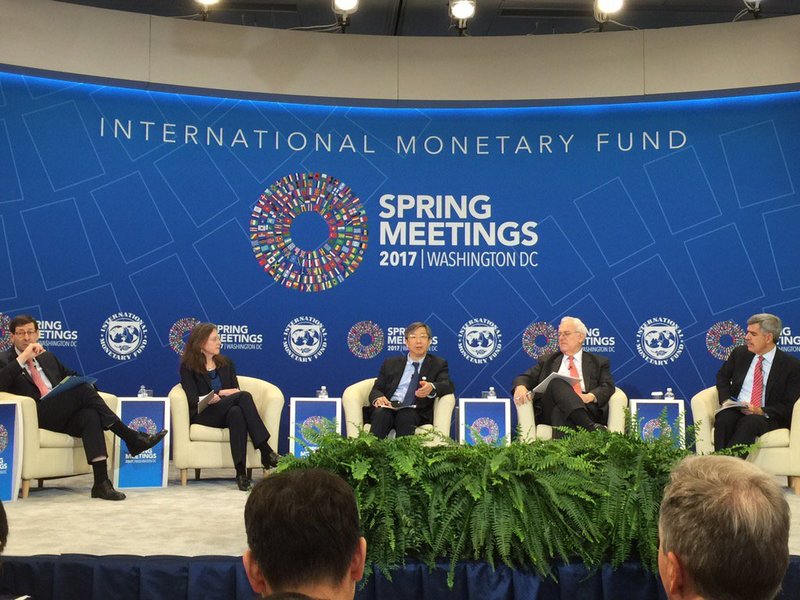 In his opening remarks Obstfeld identified, “There has been increasing debate over the role of the SDR since the global financial crisis. We in the Fund have been looking more intensively at the issue over whether an enhanced role for the SDR could improve the functioning of the international monetary system.”

“The official SDR is something we are familiar with but is there a role for the SDR in the market or a market SDR? What is the SDR’s role for the unit of account?”

Here’s the five most important signals from the world money panel, what they could mean for the international monetary system and the future of the dollar.

Special Drawing Rights: The Case for Liquidity and Central Banks

The New SDR is De-Dollarization and Multilateralism.

Dr. Schenk when asked whether the international market could proceed without a “lender of last resort” she pressed, “Why would you use a relatively illiquid element when you have the U.S dollar?”

“The U.S dollar has a lot of problems, some of it is unstable but the depth and liquidity of it in financial markets are unrivaled. The history of trying to create bond markets for other currencies or other instruments shows that it takes a long time.”

She then elaborated later in the conversation the premise that, “What we are talking about with the market SDR is trying to turn it and add more facilities to turn it into money. That will take time. Having reluctant issuing, I am worried about how that market it going to be created.”

As the dollar continues to have its issues what central banks like the Federal Reserve select to do matters significantly.

Christopher Whalen pens, “Whether you look at U.S. stocks, residential housing markets or the dollar, the picture that emerges is a market that has risen sharply, far more than the underlying rate of economic growth. This is due to a constraint in the supply of assets and a relative torrent of cash chasing the available opportunities.”

Whalen then asks the bigger question and one that could specifically matter for the SDR when he notes, “What happens when this latest dollar super cycle ends?”

In response Jose Antonio Ocampo said, “In the issue of liquidity, we still have a basic problem during a crisis – which is, how do you provide liquidity during crisis?”

Ocampo, the Colombian central bank official disclosed, “My view is that it is a function for the SDR as central bank money, let’s say.”

The SDR specialist took it further, “The real question is whether any of the major actors… and whether the U.S, either from the previous administration or the current administration, was willing [to politically act]?”

He offered, “From the point of view of the U.S the use of SDR’s as a market instrument should be more problematic than the reforms of the SDR to be used as central bank money.”

Under such circumstances the demand and confidence for the U.S dollar as a global reserve would be diminished.
[…]
As was confirmed by both the IMF report and the elite panel on special drawing rights, the U.S dollar is facing severe competition while undergoing a fiscal crisis.

Rickards leaves a stark warning, “The U.S. is playing into the hands of these rivals by running trade deficits, budget deficits and a huge external debt.”

Are You Willing to save yourself from a fate that would befall the obedient, distracted, complacent, order followering, willfully ignorant, or unthinking herd? ~Ron