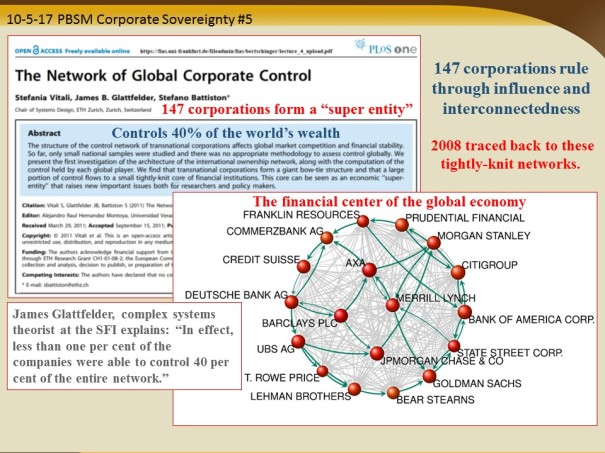 Who is really ruling the world?

The answer is hidden in plain sight.
Indeed, policy makers in think tanks and institutions (ruling class) are scripting and engineering civilization.
Financialization of the world economy is an unchecked, excessive concentration of power by corporations.
This is “governance” in the 21st century.

Do You Remember Chevron vs Ecuador?

We Know You’re Are Out There, We can See You Now

Corporations Rule – This Is Globalization engineering the emerging digital economy…

The insidious power of excessive financialization –

Consider who are writing the rules, policies, legislation, regulations, enforcement codes – this is effectively the so-called “Rule Of Law” – and those rules change on the whims of the ruling class.
Also consider how citizens are trained to obey the rule of law, obediently pay rising taxes and new taxes…

“Law abiding citizens” and “patriotic duty” are some popular slogans that may have been thought up by social engineers.
Please, re-read Edward Bernays (aka the father of propaganda) book:

The conscious and intelligent manipulation of the organized habits and opinions of the masses is an important element in democratic society.
Those who manipulate this unseen mechanism of society constitute an invisible government which is the true ruling power of our country.
We are governed, our minds are molded, our tastes formed, our ideas suggested, largely by men we have never heard of. This is a logical result of the way in which our democratic society is organized.
[…] Our invisible governors are, in many cases, unaware of the identity of their fellow members in the inner cabinet.
They govern us by their qualities of natural leadership, their ability to supply needed ideas and by their key position in the social structure.
Whatever attitude one chooses to take toward this condition, it remains a fact that in almost every act of our daily lives,whether in the sphere of politics or business, in our social conduct or our ethical thinking, we are dominated by the relatively small number of persons […] who understand the mental processes and social patterns of the masses. It is they who pull the wires which control the public mind, who harness old social forces and contrive new ways to bind and guide the world.” -Propaganda, Edward Bernays

In 1971 Nixon handed full control of inflation to the Federal Reserve, a private corporation. Thus began the financialization of global markets. In the 1980’s and 1990’s Bilateral Investment Treaties were put in place. Many of these agreements transferred rights from Sovereign Countries to multinational corporations.

In the late 1990’s corporate consolidations began to dwindle our choices, though perception management tools hid this fact from the public.

Today, 147 corporations control 40% of the world’s wealth. Those corporations can utilize those trade agreements to override governments when they feel corporate profits have been negatively impacted by sovereign government laws or rulings.

In addition, because of very little real competition in the global market place the income generated by these corporations is greater than many the GDP of many countries. Thus these multinational corporations may have more power than governments!

How does this impact you?
That is what we’ll be examining in this series

To view the supporting links and slides, please visit our website:
https://www.itmtrading.com/blog/corporate-sovereignty-part-1/

“Steve was an arms dealer”. Set up by arms dealers doing a real life demonstration of their new drone toys
https://twitter.com/vinarmani/status/915675222597971968

Users on /pol/ have discovered flight records and a plane that belonged to the Las Vegas Shooter. It is connected to an intelligence contractor who’s owner previously worked for the Obama administration.
https://twitter.com/miketokes/status/915618593726898177

“The News” is a Social Construct. It is Used to Program You.
https://www.corbettreport.com/the-news-is-a-social-construct-it-is-used-to-program-you/

Benedict Evans on the Future of Cars
http://www.econtalk.org/archives/2017/08/benedict_evans.html

Story #3: US, Russia Planning To Build Moon Base Together (So Are China, Europe)
https://www.activistpost.com/2017/09/the-u-s-and-russia-plan-to-build-a-moon-base-together.html

You can help support our independent and non-commercial work by visiting http://CorbettReport.com/Support & http://MediaMonarchy.com/Support. Thank You.

If you are not at least a bit concerned about what is happening, then you are ‘not’ paying attention.

One comment on “Globalization: Engineering Civilization in the 21st Century”