A sockpuppet is an online identity used for purposes of deception…

Did you know that the U.S. military developed software that let it secretly manipulate social media sites by using fake online personas to influence internet conversation? 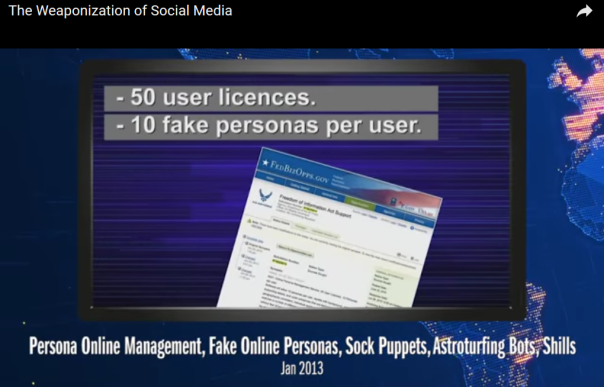 This is not new, (perhaps now with more advanced tech and more effective psychology) but many generations of Manipulating public opinion and social engineering has implemented worldwide mass deception.

$50 million led to the publication of over 200 papers; including “Incorporating Human Cognitive Biases in a Probabilistic Model of Retweeting,” “Structural Properties of Ego Networks,” and “Sentiment Prediction using Collaborative Filtering”…
Do you see the pattern?
Information warfare is worldwide and all of us are vulnerable.

…
The two informative and brief videos below are by James, the founder of The Corbett Report, and have great educational value.
Please watch, share and discuss. ~Ronmamita
§

SEAN PARKER: If the thought process that went into building these applications—Facebook being the first of them to really understand it—that thought process was all about “How do we consume as much of your time and conscious attention as possible?” And that means that we need to sort of give you a little dopamine hit every once in a while because someone liked or commented on a photo or a post or whatever, and that’s gonna get you to contribute more content and that’s gonna get you more likes and comments. So it’s a social validation feedback loop. I mean it’s exactly the kind of thing that a hacker like myself would come up with, because you’re exploiting a vulnerability in human psychology. And I think that we—the inventors/creators, you know, it’s me, it’s Mark, it’s Kevin Systrom at Instagram, it’s all of these people—understood this consciously and we did it anyway.

Title: The Weaponization of Social Media
Posted 01 Mar 2018 by corbettreport
TRANSCRIPT AND MP3: https://www.corbettreport.com/?p=25740 Now openly admitted, governments and militaries around the world employ armies of keyboard warriors to spread propaganda and disrupt their online opposition. Their goal? To shape public discourse around global events in a way favourable to their standing military and geopolitical objectives. Their method? The Weaponization of Social Media. This is The Corbett Report.

Daniel McAdams of the Ron Paul Liberty Report and RonPaulInstitute.org joins us today to discuss the State Department’s “Global Engagement Center,” an online troll farm dedicated to countering “foreign disinformation” on the web…with their own disinformation. We talk about the origins of the center and how it connects to the grander neocon-created #Russiagate disinfo campaign.