Today, freedom is a inconvenience, because the globalisation agenda offers services and products designed as a very convenient slave trap…

Intentional effort is required to pursue and protect your freedom, and your personal computer and internet activity is a obvious case in point.

The BIOS is a computer’s Basic Input/Output System, which boots the operating system and provides the interface between it and the hardware components. Though users are rarely aware of the BIOS, its foundational role makes it a user freedom chokepoint; if it is not free, users cannot trust it not to modify their computers on behalf of the company that wrote it. Our campaign for a Free BIOS promotes free BIOSes like Libreboot and librecore. Explore their Web sites to learn how to install a free BIOS or get involved in development and testing or read more from the FSF. The FSF is also pushing for the creation of a laptop with a free BIOS.

Protect your freedom and privacy; join us in creating an Internet that’s safer from surveillance 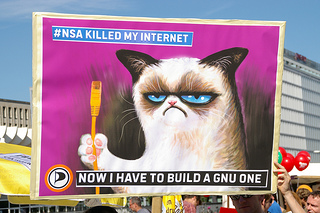 One of the goals of the GNU Project is to build decentralized, free software Web platforms that are harder to surveill. Photo CC BY SA 2.0 greenoid.

Mass-scale surveillance like PRISM is disturbing, but is an unsurprising effect of how centralized the Web is today. For years, people have been trusting more and more of their data to remotely hosted systems. Users are also giving up control of their computing to Service as a Software Substitute (SaaSS), remotely-hosted programs that exchange data with users to do computing that they could do on their own machines. In both cases, there’s no way to see what these servers are doing with your data, so you have to take the host’s word for it that they are being responsible. But these companies submit to governments when they ask for your information, whether it’s ostensibly to fight terrorism or to stop unauthorized copying.

If we want to defang surveillance programs like PRISM, we need to stop using centralized systems and come together to build an Internet that’s decentralized, trustworthy, and free “as in freedom.” The good news is that the seeds of such a network are already out there; as we wrote in our statement on PRISM, ethical developers have been working for years on free software social media, communication, publishing, and more. Being decentralized means that these programs don’t concentrate everyone’s data into a honeypot to attract snooping corporations and governments. Being free software means that it’s harder for them to keep secrets from users, and that anyone can modify them to remove features they aren’t comfortable with. In fact, those interested in surveillance have been known to require people to use proprietary programs to make it easier to keep tabs on them.

We have the tools to build a better Internet. All that’s missing is for a large number of people to leave the systems and services that make us vulnerable and put their energy and passion to work. The more of us who get on board with safer platforms and modes of communication, the stronger we all become.

What you can do

Learn more about privacy and freedom on the Web

Related work by the FSF

The FSF is a charity with a worldwide mission to advance software freedom — learn about our history and work.