The Legal Jeopardy Contagion Spreads From The Intel Spy Networks Through Justice System and Now To The Bicameral Legislature!

Have the international community yet realized how deep and wide the Swamp is?

And my discussions barely digs under the mud to reach the LONDON Connection.
The CROWN, GCHQ, HM Government, HM Treasury, and THE GOLDEN SHARE…

[…] While Adam Waldman was working as an intermediary putting Senator Warner and Christopher Steele in contact with each-other. Simultaneously Waldman was also representing the interests of… wait for it,…. Russian billionaire Oleg Deripaska.

Derispaska was the Russian person approached by Andrew McCabe and Peter Strzok and asked to assist in creating dirt on the Trump campaign, via Paul Manafort.

You see, Senator Mark Warner had/has a vested interest in making sure that no-one ever gets to the bottom of the 2016 political weaponization, spying and surveillance operation. –Sundance

The denials and ridicule began during the 2016 election campaign with everything from:
2016

And continued after entering the White House:
2017

Leaking To The Media Takes On A New Meaning

This wouldn’t be much of a Spy Scandal if SEX wasn’t weaponized, now would it?
Nope.

Enter sex reporters going down under-the-covers to scoop the news.

From the Wolfe indictment we discover:
On December 15th, 2017 James Wolfe, Ex-Senate staffer, was busted as part of the Leak investigations.

Reporter #2 was unmasked as Ms. Ali Watkins and the most difficult-to-obtain journalist’s search warrant was obtained to seize evidence and uncovered the unredacted secret Carter Page FISA warrant application in Ali Watkins possession.

The public FISA version remains mostly redacted and yet Sundance reports some curious oddities…
The above is a must read for sleuths looking into the spygate “Operation Crossfire Hurricane“.
Hillary was never meant to lose the 2016 election.

Slowly, some of that redacted information is being shared with the public:
Two more fraternizing FBI employees with anti-Trump and Pro-Hillary political bias were involved in both investigations to protect Hillary and destroy Trump.
Those two redacted love-birds names in the appendices of the OIG Report are Sally Moyer as “ Attorney 1”, and “Attorney 2” as Kevin Clinesmith.

However, in the public’s attempt to unmask them, some confusion was caused and the
NY Post reports “Clinesmith is “FBI Attorney 2” in the [OIG] report, while [Sally] Moyer is, in fact, “FBI Attorney 1,” which is not listed as one of the agents or lawyers cited for bias or referred for investigation.” 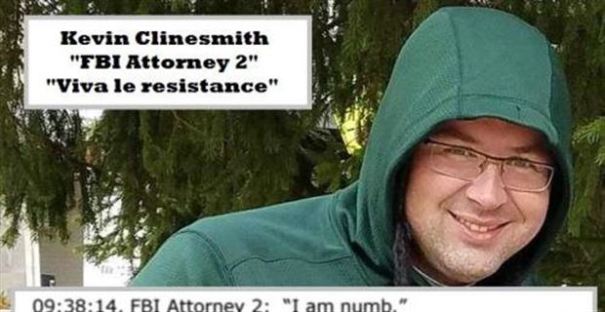 We found messages in which FBI Attorney 2 discussed political issues, including three instant message exchanges that raised concerns of potential bias,” the IG report says. The Midyear investigation is the Clinton email investigation.

Attorney 2 was assigned to the Clinton investigation early in 2015 and was not the lead FBI attorney assigned. He provided support as needed.

FBI Attorney 2 was also assigned to the investigation into Russian election interference and “was the primary FBI attorney assigned to that investigation beginning in early 2017,” the report says.
Read: https://heavy.com/news/2018/06/kevin-clinesmith-e/

So many Americans have been wondering why the investigations are taking too long, and what is holding up Nunes from impeaching Rosenstein?

The answers are starting to drip out.
Some powerful Congressional members may be the bottleneck afflicted with the Deep State Criminal Plague.

Thus, the hunt for the individuals and groups doing the obstruction, leaks and spying is on!

– Checks and Balances or CYA? –

The Gang of Eight are briefed on every covert operation that our various intelligence agencies carry out. They are directly responsible for oversight of the Central Intelligence Agency (CIA), the National Security Agency (NSA) and the Office of the Director of National Intelligence (ODNI).

The Go8 are responsible for overseeing all executive office policy as it relates to intelligence gathering and corresponding activity. In short these eight elected representatives are in charge of all oversight of all U.S. intelligence operations, open and covert.
[…]
Never forget this undisclosed motive to advance cover-ups.

It is also never discussed in the media.

My spidey senses are telling me that understanding these facts, and understanding the construct of this oversight, will be an important reference point for all Americans in the very near future. –By Sundance

7 out of 8 fit the Deep State criminal plague’s CYA pattern.
Can you guess who is the odd one out?

There’s a lot more evidence, but you can see the reason for suspicion.
Sure McConnell could flip, and stop supporting the establishment in favor of disrupting the globalist’s trends.
But, I doubt it.
∇

PROTECTION RACKET: The Deep State is the Permanent State

The more the self-proclaimed ‘Red Pilled’ Patriots investigate the U.S. Gov Swampland, the more corruption and crimes that will be revealed.

However, without criminal indictments and impeachments to remove them from office, the coverups will continue – even into the desperate stage when “Sudden Death Syndrome” becomes an epidemic.

Nervous eyes are watching the U.S. racket division from the LONDON division and elsewhere.
The racket is internationally organized within the IMS.
…

Title: Clapper: We Followed POTUS’ Orders
Posted 23 Jul 2018 by Headlines With A Voice

Hear Clapper confess to Anderson Cooper on CNN:
“If it wasn’t for President Obama, we might not have done the Intelligence Community Assessment that we did that set off the whole sequence of events which are still unfolding today – notably, Special Counsel Mueller’s investigation[s]. President Obama is responsible for that and it was he who tasked us to do that Intelligence Community Assessment in the first place.”

One comment on “FBI’s Spygate Contagion Spreads To Congress”