Home › Freedom-Expressed › Did Trump’s Nationalist Faction bite off more than they can chew?

Did Trump’s Nationalist Faction bite off more than they can chew?

Personnel Must Blow The Whistle!!!

For the truth shall be revealed.

Institutional governance declared a perpetual war a long time ago.
The ruling class’ “Silent War” is a permanent war for control of a worldwide monetary system with a class of masters and slaves.

Trump knows or should know that the FBI/DOJ & Intel Community is compromised with criminals and double agents, and yet thus far, his nationalist faction fail to clean it up, or as his slogan stated: “Drain The Swamp“.

If Trump doesn’t begin to reign in the criminals inside his Administration, then he may lose the support of those who voted for him because they couldn’t allow crooked Hillary to sit in the White House, and who may lose patience with Trump’s failure to “Lock Her Up“. 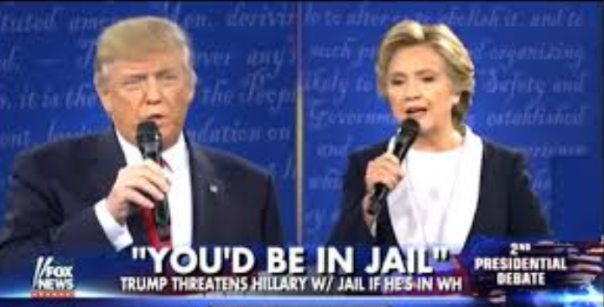 Trump could lose some popular support among the self-proclaimed “Red Pilled Patriots” who are the base of his public voter support.

Believe it or not, there are news reports that Hillary Clinton plans on campaigning for 2020 President!

Without criminal indictments everything is merely a entertaining political game show.

With the documented evidence in the public domain, there is no doubt that the U.S. Government under the Obama Administration with the law enforcement and Intel agencies attempted to interfere with the 2016 Elections.

Listen to investigative journalist Lee Stranahan, and these important take away facts:

1. Hillary Clinton served as the 67th United States Secretary of State, under President Barack Obama, from 2009 to 2013 and “NEVER” used the authorized State Department’s email server, but instead chose to compromise government security during her entire tenure!
Personnel’s complaints went nowhere and they were warned to not complain.
2. This crime was indeed intentionally kept secret from Americans.
This Hillary Clinton email scandal didn’t become public until late 2014, almost two years after she departed the government!
3. Hillary Clinton never answered to a Inspector General because that IG office remained vacant during her entire tenure, oh how convenient President Obama!
4. The DOJ/FBI obstructed justice to protect Hillary Clinton and not prosecute her crimes.
5. The MSM news should have covered this Hillary email & Benghazi scandal in the headlines and spotlight as fervently as the Trump Russia Collusion and Kavanaugh senate confirmation hearings, but no, the media stop covering Hillary crimes while predicting her to become the first U.S. Madame president.

Can you smell a real conspiracy?

Institutions Sinking Into Their Global Swamp

The financial markets are the number one campaign contributors in the U.S. system now.
We have a corrupt politics to the core – this has nothing to do with Democrats or Republicans, it really doesn’t have anything to do with Right Wing or Left Wing [chuckles] by the way.
The corruption is, as far as I can see, everywhere.
But, what it has led to, is this sense of impunity.” –PhD. Jeffrey Sachs

Tagged with: news
Posted in Freedom-Expressed