Many thanks to the Land Destroyer Report for sharing these important events. ~Ron
.
November 26, 2013 (Tony Cartalucci) – Unprecedented protests have taken to the streets in Bangkok, now for weeks, where at times, hundreds of thousands of protesters have appeared. Estimates range from 100-400 thousand people at peak points, making them the largest protests in recent Thai history. 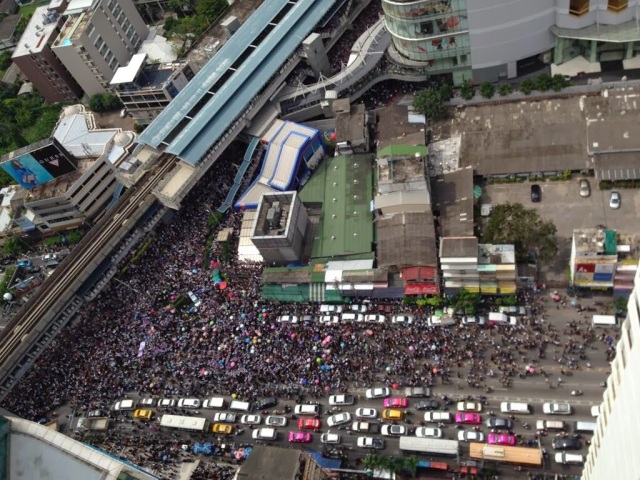 Images: Scenes taken from across Bangkok showing masses of people protesting the current government in Thailand. Unlike the government’s mobs of “red shirts” centrally directed by Thaksin Shinawatra himself, these rallies are led by a myriad of leaders and interest groups, from unions to political parties and media personalities. The numbers now present dwarf any effort by Thaksin and his political machine to fill the streets with supporters. Currently, the “red shirts” have failed to fill even a quarter of a nearby stadium, after two earlier abortive attempts to raise a counter-rally.

[…]
In 2004, Thaksin attempted to ramrod through a US-Thailand Free-Trade Agreement (FTA) without parliamentary approval, backed by the US-ASEAN Business Council who just before last year’s 2011elections that saw Thaksin’s sister Yingluck Shinawatra brought into power, hosted the leaders of Thaksin’s “red shirt” “United Front for Democracy against Dictatorship” (UDD).