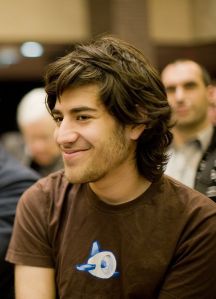 When I read about his accomplishments and experiences in a very short life I am moved with the awareness that a great potential is present in the People on Earth. Aaron was not alone and the DIY trend is growing in the Open Source, Hobbyist, Amateur, and Entrepreneur communities.
Skills, crafts, arts, and inventions are being expressed in the homes, garages, and workshops of local communities to remind us to not give up in our pursuits of solutions, remedies and joy.
I am reminded of other bright flames that had untimely deaths, such as Bruce Lee who inspired a generation of martial artists, philosophers, film actors, directors and others to pursue their passion in life.
Creativity, innovation, and passion is being shared in all regions of Earth and the current meme of hierarchical, centralization of institutional control is on the way out as a new paradigm with decentralization and personal sovereignty emerges during this global financial collapse…

I encourage you, the reader, to share your skill, passion and support with kindred souls and together we create the CHANGE as alternatives we want to see in the world where abundance, prosperity, peace and love is shared.

Below are some excerpts from people who knew Aaron Swartz:

Michael Krieger writes – “At 14 years old he helped start the RSS feed system, which so many now use to read content online.  He also co-founded Reddit, and its sale to Conde Nast is what afforded him the resources to dedicate his life to the defense of a free and open internet.  His most remarkable success in this regard was the creation of the organization Demand Progress, which was instrumental in defeating the internet censorship bill know as SOPA (the Stop Online Piracy Act).”

… when Aaron downloaded millions of academic journal articles from the nonprofit online database JSTOR, [the people managing] JSTOR could have pursued charges against Aaron for his activities, they decided against it.  However, the Federal Government was not so kind.  The government decided to make an example of Aaron and charged him with multiple felonies.  Charges that carried up to 35 years in prison and $1 million in fines.  Aaron was found dead in his Brooklyn apartment … in an apparent suicide.

PS: On Saturday, 11 Jan 2014 [Lessig and supporters] begin a walk across the state of New Hampshire, to launch a campaign to bring about an end to the system of corruption that we believe infects DC. This is the New Hampshire Rebellion.