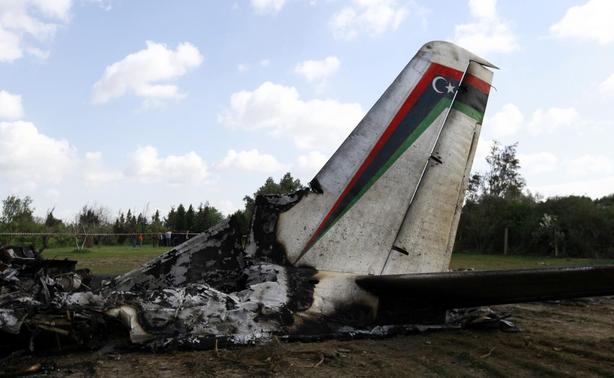 This was the second military plane crash in 2 weeks!
Marking this worthy of investigation with a suspicious eye. ~Ron

21 February 2014
Source: Reuters – An Islamist official in Libya’s government and 10 other passengers and crew were killed when a military plane carrying medical patients crashed near Tunisia’s capital early on Friday, officials said.

The Libyan Antonov aircraft went down after the pilot tried to land in farmland near Grombalia town south of Tunis, Tunisia’s TAP state news agency reported.

Sheikh Meftah Daouadi, undersecretary at the Libyan Ministry of Martyrs which looks after families of fighters killed in Libya’s 2011 revolution, was among the dead, said a spokesman for his organization, the Operations Room for Libyan Revolutionaries.

The veteran Islamist fighter took part in the revolt against Libyan leader Muammar Gaddafi. It was unclear whether he was a patient, or was on the plane accompanying one of the other passengers.

Six crew members as well as the patients and their companions died, a spokesman for Tunisia’s defense ministry said. Libyans often travel to Tunisia for medical treatment.

It was the second crash involving a military plane in North Africa in two weeks.

An Algerian military transport plane crashed into a mountain in bad weather on February 11, killing 77 people, in that country’s worst air disaster in a decade.