Home › Freedom-Expressed › What was Significant About “Magic 7” in Christine Lagarde’s Global Speech?

What was Significant About “Magic 7” in Christine Lagarde’s Global Speech?

7 – This number is significant in several ways.
“Seven is a powerful number in the manipulation of humanity…”
“the seven concentric cycles of the seven spheres”
Biology: of the twelve DNA strands Strand 7: Ability to accept both our dark and light sides
There are 7 chakras
There are 7 days of the week.
There are 7 basic musical notes (A, B, C, D, E, F, and G)
There are 7 Creative powers of the Godhead.
There are 7 Great Ages of the Earth.
There are 7 Races of mankind.
There are 7 laws governing human life.
There are 7 Schools of Mystery Religions.
In Theosophy there is a seven step process of human evolution in which successive races evolve from a lower to a higher form of life.

The number 7 = Perfection and Completion

[Could this be a recognition of the end of operations by the secret/hidden cabal? The unification of the Light & Dark forces?]
If completion exists then revelations are expected, evidence and knowledge is forthcoming.
The existence of this completed phenomena will have observable results for us to see and experience.

Christine Lagarde following orders in announcing this significant, magic 7, year to the WORLD!


IMF director, Christine Lagarde, said: “I do as I am told”… “Thank the National Press Club and President Angela Greiling Keane… it’s as if we had prepared that together …wishing you all a happy new year. I guess it’s still time to do that, given that we are just exactly half way through between our western new year and the lunar new year, which will loom in a few weeks’ time.
…I’m going to test your numerology skills by asking you to think about the magic seven…”

“And there shall arise after them seven years of famine; and all the plenty shall be forgotten in the land of Egypt; and the famine shall consume the land;”–(Genesis 41:30 KJV)

“And they that dwell in the cities of Israel shall go forth, and shall set on fire and burn the weapons, both the shields and the bucklers, the bows and the arrows, and the handstaves, and the spears, and they shall burn them with fire seven years:”-(Ezekiel 39:9 KJV)

Researching the importance of the SEVEN is voluminous and requires a archival library.
777 – Aleister Crowley wrote a book called 777 that is significant
In the realm of Minerals and Geochemistry, there are seven crystal systems: 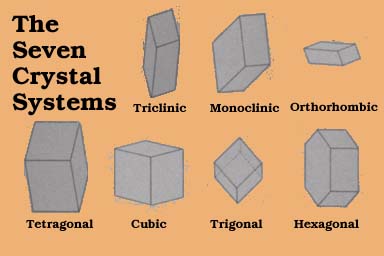 Pass sunlight through a prism, it produces seven colors

The Periodic Table of the known Elements appears to have seven levels of periodicity:

The ancients divided the human frame into seven parts; the head, the chest, the stomach, two hands and two feet; and man’s life was divided into seven periods. A baby begins teething in the seventh month; a child begins to sit after fourteen months (2 X 7); begins to walk after twenty-one months (3 X 7); to speak after twenty-eight months (4 X 7); leaves off sucking after thirty-five months (5 X 7); at fourteen years (2 X 7) he begins to finally form himself; at twenty-one (3 X 7) he ceases growing. The average height of a man, before mankind degenerated, was seven feet; hence the old Western laws ordering the garden walls to be seven feet high. The education of the boys began with the Spartans and the old Persians at the age of seven. And in the Christian religions – with the Roman Catholics and the Greeks – the child is not held responsible for any crime till he is seven, and it is the proper age for him to go to confession.
HINDUS:
seven sages  – the Sapta Rishis; the Sapta Loka – the seven worlds; the Sapta Pura  – the seven holy cities; the Sapta Dvipa – the seven holy islands; the Sapta Samudra – the seven holy seas; the Sapta Parvatta – the seven holy mountains; the Sapta Arania  – the seven deserts; the Sapta Vriksha  – the seven sacred trees; and so on…


Frank Chester’s research reveals the seen and unseen energy:
7 faces, with 12 edges is the form of the heart…
You see all the platonic forms and the chesterhedron form within this heart-based energy, as it is a dynamic asymmetrical heart-based vortex energy.

Meditate on this concept of Seen and Unseen:
We are more than a Body, We are consciousness, energy, spirit beings having a in-body temporary experience.
The illusion is removed, as a whole being of awareness we are reunited with creation, nature, abundance, wisdom, knowledge, liberty, freedom…

15 comments on “What was Significant About “Magic 7” in Christine Lagarde’s Global Speech?”