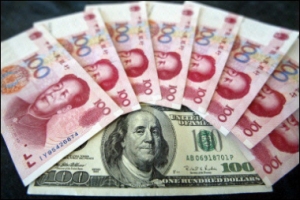 The Swiss National Bank were very big “supporters” of the European currency unit, amassing nearly 600 billion euros on their balance sheet.
The great instability in the currency markets was laid bare for the world to see when recently the Swiss dropped their currency peg to the Euro and saw a 30% rise in the Swiss Franc within minutes!
That severe of a major currency move has not been seen in the 21st century…
Another surprise is the old lesson to not trust anything the executives say, because it is only their actions that tell the true story: It was only 3 days prior that the SNB reassured the markets the Swiss would continue the currency Peg, and then the surprise move that dropped the peg three days later. Talk about deception!
What little amount of trust existed in the Ponzi Economy, the global monetary system, has surely evaporated as this new year of 2015 is set to transition from the old monetary system to something different. The ramifications will continue to unfold in coming months…

Now a big puzzle piece may have been revealed, along with the arrival of Premier Li Keqiang.
The Swiss may have been offered a GREAT DEAL from China!
{Hmm…did the spying agencies know of this in advance?}
Apparently it is only a matter of time before China’s currency peg to the U.S. Dollar is removed!
Before the end of 2015 We expect the RMB to be a RESERVE CURRENCY.
Crisis: It is not a Accident, it is Policy. ~Ron

China‘s and Switzerland’s central banks have signed an agreement to make Zurich the newest hub for trading the renminbi currency (RMB).

Switzerland will receive a quota of RMB50 billion (CHF7 billion) to establish itself as a so-called RMB Qualified Foreign Institutional Investor, or RQFII, according to an announcement from the Swiss National Bank (SNB). Switzerland’s status as a “renminbi hub“ will give Swiss commercial traders the ability to make and clear direct trades with their Chinese counterparts in China.
The agreement suggests that a Chinese commercial bank may also establish itself in Switzerland in the coming months, since such a presence is necessary for renminbi clearing arrangements to take place.

The SNB called the agreement, which was reached on the sidelines of the World Economic Forum’s annual meeting in Davos, “a sign of fresh progress in bilateral financial cooperation between China and Switzerland“.

GATA: If I were head of the FED I would jump out the window!