Theft is Now Redefined As Negative Interest Rates By Banksters 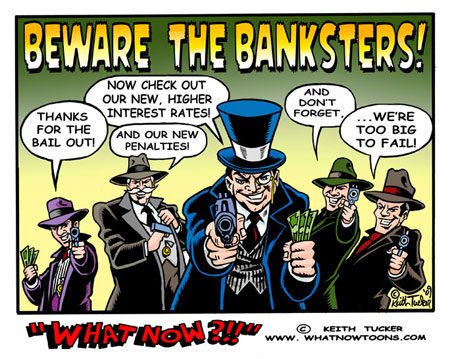 Stop Tip-toeing around the truth!
You and I are not allowed the privilege of negative interest on the mortgage of a home, car loan, or credit cards.

Your assets, savings, and retirement funds managed by the banks will be pillaged because negative interest rate policies (NIRP) are now in effect!
NIRP is THEFT!
Bank bailouts are now Bail-ins.

I think this friendly reminder is timely, as a public service announcement for worldwide discussions.
You should be aware that the institutions do not have your best interest as priority, and nor are they trustworthy.
You should also be able to imagine the Next Collapse is a Opportunity to Break Free of Worldwide Debt Slavery.
Thus, grassroots and your individual problem solving abilities are required for the “shift” and transition out of this Age of Deception.
Together, People worldwide amplify awareness with the intentional will to change direction away from secret trade agreements that place mega corporations and intergovernmental organizations with international alliances in charge of you and your community.

In 1934, there were 14,146 commercial banks with FDIC insurance in the United States. By 1985, that number had barely budged – we had a total of 14,417. But as of this month, we have 6,172 FDIC-insured commercial banks, a decline of 57 percent, with the annual declines accelerating after the passage of Riegle-Neal in 1994. –wallstreetonparade.com

The crisis from 2008-2009 was kicked down the years and here, today is where banks continue their pillaging and plundering schemes.
Wealth redistribution with capital controls is underway, and as an example consider austerity or cashless society policies.

The financial pain and suffering is meant to increase for the “reset” of the system with the planned reforms and restructuring to become acceptable as the solution to the crisis and suffering worldwide.
Expect a future emergency financial or G-20 summit.
Concentration of enforcement power is preferred by the elite globalists.

There is good reason why psychological studies of sociopaths and narcissists explain the behaviour we witness in executives and officials who make policies. They are in the business of creating crises and then managing those crises they created.
The policy makers are dishonorable, deceptive, and dangerous.
Funding wars, and implementing globalization are not accidents.

Many individuals are speaking out about globalization, the policy makers, debt slavery, resetting the international monetary system, and institutional governance.
Please Follow The Money, click the links below and consider your personal preparations. Remember, The Crisis is Not An Accident, it is Policy. ~Ron

Posted on February 9, 2016 by WashingtonsBlog

More than one-fifth of the world’s total GDP is in countries which have imposed negative interest rates, including Japan, the EU, Denmark, Switzerland and Sweden.

Nor have they even stimulated spending…

Cash Wars: The People Strike Back?

You might remember that a couple of weeks ago we launched an open source investigation into the war on cash. As I noted at the time, the investigation was spurred by an uptick in anti-cash rhetoric over the last few months from the media, from central bankers and from politicians. Since that investigation took place, however, things have gotten even more in-your-face.

Just four days after we started the investigation Bloomberg came out with an op-ed urging the banksters to “Bring On the Cashless Future.”

Four days after that PayPal kicked off their anti-cash, “PayPal is New Money” advertising campaign at the Super Bowl.

And in the latest move the ECB is now officially considering scrapping the 500 euro note, a move that some worry is just the first step toward limiting cash purchases or eliminating it all together.