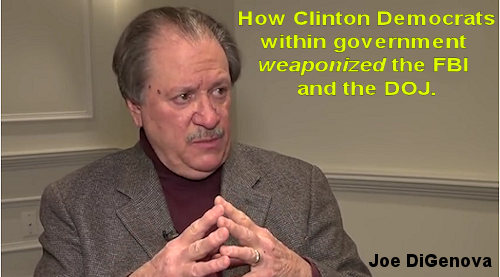 Americans Don’t Trust The U.S. Government, and Justifiably So

Mass surveillance, censorship, news propaganda, aka “fake news”, corruption, and the blatant disregard for the U.S. Constitution to restrict government’s abuse of power.

Watch U.S. Congressman Gohmert: “This is their mode of operation. This is what they do.”

“The Trump Campaign’s efforts to elect President Trump in D.C. are not suit-related contacts for those efforts did not involve acts taken in furtherance of the conspiracies to disseminate emails that harmed plaintiffs,” wrote the Clinton-appointed judge. “Campaign meetings, canvassing voters, and other regular business activities of a political campaign do not constitute activities related to the conspiracies alleged in the complaint.” Politico reported.

According to Fox News:

The DNC itself wasn’t part of the suit, though it had brought a separate lawsuit back in April, accusing top Trump campaign officials, including Trump’s son Donald Jr. and Trump’s son-in-law Jared Kushner of colluding with the Russians.

Stone’s role in WikiLeaks activities raised concerns after the revelations that he reportedly exchanged messages with both WikiLeaks and Guccifer 2.0 – a social media account that U.S. intelligence agencies believe was part of the “Russian military intelligence” effort to spread the hacked emails, The Daily Beast reported.

Fighting Factions Within The U.S. Gov

The BBC reported that sometime in: April 2016 John Brennan, the CIA director, was shown intelligence that worried him. It was – allegedly – a tape recording of a conversation about money from the Kremlin going into the U.S. presidential campaign…

Do you remember Intel and law enforcement agencies launched investigations by claiming Australian Ambassador Alexander Downer, (who donated many millions of Australian tax dollars to the fraudulent Clinton charities), informed the FBI that in 2016 George Papadopoulos blabbed that the Russians had dirt on Hillary Clinton?

The London Connection remains obscured in the background as intelligence contractors, Stefan Halper, Joseph Mifsud, Christopher Steele and others are ignored.

Robert Mueller was appointed Special Counsel in May 2017 by Rod Rosenstein, who was in turn influenced by the fired FBI director James Comey to continue the FBI Trump Campaign Probe.

Attorney General Jeff Sessions appointed Bradley Weinsheimer to replace Schools. Unlike Schools, Weinsheimer will not be involved in the Mueller probe, according to the DOJ.

Scott Schools and Principal Associate Deputy Attorney General Ed O’Callaghan have been meeting with Mueller every week, according to NPR.

Special Counsel Robert Mueller has asked for yet another delay in the sentencing of former National Security Advisor General Mike Flynn.

What is becoming obvious to all who are closely watching, is that if Mueller sentences Gen. Flynn then Mueller could face criminal charges for false indictment and prosecution as the FBI 302s evidence was tampered with and destroyed.

Not a slap on the wrist for Imran Awan, but rather a very ‘special’ passionate wet tongue French-kiss by the DOJ!

Career legal professionals are stating that connected individuals (such as those connected to the Clinton crime ring) are routinely given sweetheart plea deals and special treatment in criminal prosecutions.

Sadly, but not surprisingly, Imran Awan was given a overly generous plea bargain in the DOJ’s attempt to close this criminal case before government officials can be implicated in the Hillary Clinton, government, DNC Political Party email money laundering/espionage scandals.

An assistant U.S. attorney said Tuesday he would not prosecute Imran Awan, a former systems administrator for Rep. Debbie Wasserman Schultz and other Democrats, for any crimes on Capitol Hill in a plea agreement that had him plead guilty to one count of bank fraud.

Only one person sat at the prosecutors’ table: J.P. Coomey, who unsuccessfully prosecuted New Jersey Democrat Sen. Bob Menendez for corruption and was only added to the case Monday. There was no sign of Michael Marando, who had previously led the prosecution.

Coomey did not object to the removal of Awan’s GPS monitor, said he would not oppose a sentence of probation, and agreed to drop charges against his wife, fellow former systems administrative Hina Alvi. –Daily Caller

– Campaign Funds –
If I hazard a guess, I would not be surprised if Americans remain focused on the ‘Spygate’-Clinton/Obama/Soros Resistance Campaign disrupting U.S. political events such as Border/Immigration Legislation, Supreme Court Nominees, Political appointees, Treaties, Paid Protests, and social unrest.

As long as Obama and Hillary actively lead the so-called political ‘resistance’ and fuel social unrest via MSM, government, lobbying, and political campaign funds then America sinks deeper in the swampland of corruption.

Without criminal prosecutions this is nothing more than entertainment.

Who is preventing the U.S. House of Representatives from voting holding the Department in Contempt of Congress and impeachment?
I want a name!
Is it the House Leader, Republican Paul Ryan?!