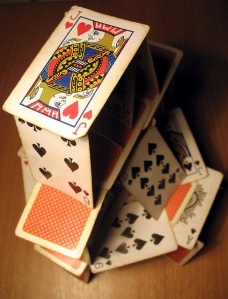 My expectations that the officials would violently subdue public protests slowly materialized as both the Tea party and Occupy movements revealed the sociopaths in government and banking.
Now my expectations are on the, behind the closed doors, in-fighting that is likely going on and intensifying as the subordinates see an opportunity to enrich themselves or as they feel threatened by their superiors, or partners feel betrayed, or fraud in contracts are revealed.
As every Gamer knows an exploit will be used and abused until it is removed.
Low morale and lost trust can effect all things…
Can you imagine executives betting against their firms, or a major investor taking advantage of the rigged markets, or a HFT financial computer server malfunctioning?
Perhaps a group of generals and admirals disagree with the heads of state…
Even another spurt of “suicided” financial executives or missing people becomes public news is a likely eventuality as the desperation among the central planners increases.
Perhaps a public referendum gets a tremendous amount of funding that closes or nullifies government agencies; or perhaps crowd-funding becomes a phenomena countering the establishment…
The impact of shifting support away from the establishment is what I am watchful of.
The signs can be varied and subtle, such as a increase in unscheduled maintenance, decrease in quality assurance, while simultaneously increasing maintenance/production costs and more frequent delays.
We are currently witnessing decreasing consumer demand and corporate profits as economies contract, but the contradiction of executive bonuses and “Bull” markets continue to climb higher.
The “collapse” should have plenty of signs or symptoms on display for those who are searching for them.
Fear and anger within institutions are likely to mount as both public support and customers are lost.

The obvious market rigging, the corrupt politicians, the currency wars, the trade deficits, the increasing taxation, the banking fees & currency controls, the odious national debts, the military wars, the security searches, the mass surveillance, the invasion of privacy, the increase homelessness, joblessness, poverty, and social unrest are evidence of the collapse that is more rapidly approaching since September 2001.
What is next? ~Ron

Bill Holter: Everybody in authority knows what GATA knows

Everybody in authority knows about gold and silver price suppression by the U.S. government, Bill Holter writes today, but nobody in authority wants to acknowledge it in public while those who know work to exploit it.

Holter, who writes for the Miles Franklin coin and bullion dealership in Minnesota and for GATA Chairman Bill Murphy’s LeMetropoleCafe.com, says GATA has done its job.

Holter writes: “I believe that long ago foreigners figured out what GATA has been trying to inform the public about for what seems like forever. First off, if GATA figured out that gold and silver prices have been manipulated and suppressed, so have others. Not only can ‘others’ figure it out on their own. GATA has made all of their information 100 percent public and available. They have sent evidence everywhere imaginable. They have tirelessly sent evidence to the press, the newspapers, and TV stations both here in the United States and abroad. They have sent evidence to the Commodity Futures Trading Commission, the Securities and Exchange Commission, regulators of foreign nations, senators, congressmen — you name it, and GATA has sent it.”

And despite the silence around the information GATA has distributed, Holter thinks many people in authority are acting on it. His commentary is headlined “It’s a Trap?!?!” and it’s posted at the Miles Franklin Internet site here:

Why Is Dubai’s Stock Market Crashing?

Dubai has been looking like a property bubble for a little while now.

Shaken by a fraud investigation into metal financing in the world’s seventh-busiest port, banks and trading houses have been made painfully aware of the risks they face storing commodities in China’s sprawling warehouse sector.

The probe at Qingdao port centers around a private metals trading firm suspected of duplicating warehouse certificates in order to use a metal cargo multiple times to raise financing.

Some banks have asked clients to shift metal, used as collateral for loans, to more regulated London Metal Exchange warehouses outside China or those owned and operated by a single warehouse firm to limit their exposure.

“The banks still haven’t looked under the hood,” said an executive at a bank involved in commodity financing in China, referring to China’s warehousing sector
…