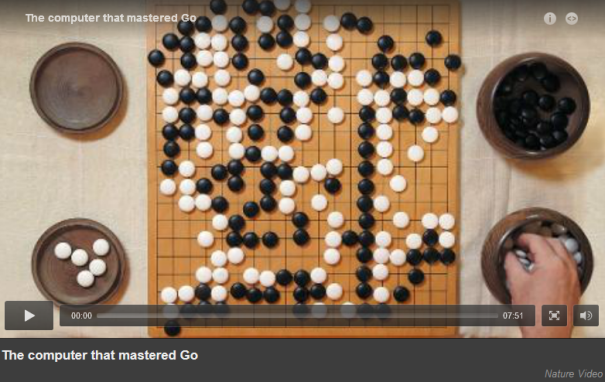 Google’s artificial intelligence computer has beaten the European champion of the board game Go. Not just once; but 5 to 0. This is far more difficult than Chess. This is more than merely creating lists of patterns to beat. It requires strategy. –Martin Armstrong

I see this simply as a intentional pursuit of worldwide control.
This is an age-old script.

From the days of overt slavery, to the current era of covert slavery, also known as debt slavery, to a future of reduced population, cashless society of technocracy and slave-bots.
The psychopathic globalists’ agenda want obedient workers, indeed they require slaves, and that quest can be seen throughout history.
Schools, aka “indoctrination centers”, and propaganda mass media are insufficient programming tools to maintain an obedient class of workers for worldwide control.

I thought it very telling when this year’s DAVOS  World Economic Forum theme was “The Fourth Industrial Revolution“.
DAVOS is where the wealthiest and most influential individuals meet.
U.S. VP Joe Biden, U.S. Secretary of State John Kerry, IMF Christine Lagarde, and other globalists were there.
This is what the control freaks revealed at DAVOS:

How can we embrace the opportunities of the Fourth Industrial Revolution?

Of the myriad challenges the world faces today, perhaps the most overwhelming is how to shape the Fourth Industrial Revolution that began at the turn of the century. New technologies and approaches are merging the physical, digital, and biological worlds in ways that will fundamentally transform humankind. The extent to which that transformation is positive will depend on how we navigate the risks and opportunities that arise along the way.

The Fourth Industrial Revolution builds on the Third Industrial Revolution, also known as the Digital Revolution, which entailed the proliferation of computers and the automation of record keeping; but the new wave of transformation differs from its predecessors in a few key ways. First, innovations can be developed and diffused faster than ever. Second, falling marginal production costs and the rise of platforms that aggregate and concentrate activity in multiple sectors augment returns to scale. Third, this global revolution will affect – and be shaped by – all countries, and have a systems-level impact in many areas. –weforum.org/agenda/2016/01/

A technician makes adjustments to the “Inmoov” robot.

“We stand on the brink of a technological revolution that will fundamentally alter the way we live, work, and relate to one another. In its scale, scope, and complexity, the transformation will be unlike anything humankind has experienced before. We do not yet know just how it will unfold, but one thing is clear: the response to it must be integrated and comprehensive, involving all stakeholders of the global polity, from the public and private sectors to academia and civil society.” –Klaus Schwab was born in Germany in 1938, Founder and Executive Chairman, World Economic Forum.

With Robotics, A.I., HFT in the markets, Killer Drones in the Wars, tracking software, and Automatons in the corporate workplace, you can see a trend for the future of civilization.
We saw this trend developing when IBM’s Deep Blue super computer beat chess masters in the 1990s, and we continue to witness this developing policy as drones and robots are built for military, police, corporations…