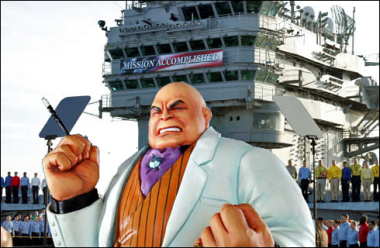 The Too Big To Fail Corporations have insurance.

A colloquial name given to the Working Group on Financial Markets. The Plunge Protection Team was created to make financial and economic recommendations to various sectors of the economy in times of economic turbulence. The team consists of the Secretary of the Treasury, the Chairman of the Board of Governors of the Federal Reserve, the Chairman of the SEC and the Chairman of the Commodity Futures Trading Commission.
“Plunge Protection Team” was the nickname given to the Working Group by The Washington Post in 1997. The team was initially perceived by some to have been created solely to shore up the markets or even manipulate them. The team was created in response to the 1987 market crash. -investopedia.com

Label anyone with “conspiracy theory” and it instantly became taboo, along with media censor and blackout!
But, now that label has lost its effectiveness as most conspiracies have been revealed as facts.
Facing the truth shines light on institutional crime. ~Ron

Recorded on February 5th 2009
While Timothy Geithner leads the President’s Working Group on Financial Markets ( aka the plunge protection team ), he mentions that this economic crisis is an opportunity to change things; and he states that the big change to come will prevent such crisis from ever happening again.

This sounds just like the 1913 propaganda: the creation of the federal reserve would stop future economic crisis”.
However, it succeeded in more centralized power into fewer hands.
History repeats itself.
Tim “tax cheater” Geithner sounds like a scammer!
.

Via zerohedge.com – …the Plunge Protection Team is nothing but the traders located on the 9th floor of the New York Fed at 33 Liberty street, which transact either unilaterally (because it is within their mandate) when buying (never selling) fixed income securities, or via Citadel when it comes to selling VIX or buying index futures to ramp the market at just the right time and break any bearish momentum. Sadly, with great central planning responsibility comes a great media black out, and no photographers are allowed to see Simon Potter, Kevin Henry, et al in action before their Bloomberg terminals and trading turrets.

From the NY Fed:
In the years following World War I, the Federal Reserve Bank of New York began to realize the power of open market operations when purchasing a large number of government securities in the hope it would prevent a recession, and found that the action had a large-scale effect on the financial system. New York Fed president Benjamin Strong hoped to use these operations to show that the monetary system could support a multiple expansion of deposits and credit.

During the December 19, 1923 meeting of the Federal Reserve Board, President Strong submitted a statement on open market operations that explained how the New York Fed’s open market policy was affecting the economy. “The volume of open-market holdings with which the reserve banks entered the year 1923 put them in possession of an admirable instrument for testing the degree of dependence of the credit structure upon Federal Reserve bank accommodation.” As a consequence of these new actions taken by the Federal Reserve Bank of New York, the Open Market Investment Committee (OMIC) was formed in early 1923 with the hopes of having the Fed’s two methods of extending credit (rediscount and open market operations) “brought into harmony.”

Today, the New York Fed conducts temporary and permanent open market operations to implement monetary policy. Securities purchased through these operations are managed in a portfolio known as the System Open Market Account and are lent on a daily basis through the securities lending program. -zerohedge.com

VIA: Rense.com
…people who control all of the U.S. markets through their use of dangerous and explosive DERIVATIVES. They are risking the assets and retirement funds of all Americans. Because of their manipulations, especially since 2001, U.S. financial markets are now based on the gambling whims of a special fraternity of Federal Government DERIVATIVE dealers.

This group is known among Wall Street as the Plunge Protection Team (PPT). Their “official” role was to prevent another 1987 “Black Monday”. They have the entire U.S. Treasury at their disposal to manipulate the markets through DERIVATIVES (futures options). In other words, they are using the assets behind the U.S. Treasury to rig the prices of commodites (gold, currencies, etc.) and stocks.

This fraternity comprises of Fed Chairman Alan Greenspan, the Secretary of the Treasury, and the heads of the SEC and the Commodity Futures Trading Association. It works closely with all the U.S. exchanges and Wall Street banks, including the largest DERIVATIVE risk holders Citibank and JP Morgan Chase.

Few people are aware of Executive Order 12631 signed by Ronald Reagan on March 18, 1988. In a nut shell, this is the “authority” behind the four dictators and the [sic] “laws” and “regulations” that have backed their casino-style DERIVATIVE gambling spree since 2001. Here are some highlights of this Executive Order to ponder:

“By virtue of the authority vested in me as President by the Constitution and laws of the United States of America, and in order to establish a Working Group on Financial Markets, it is hereby ordered as follows:

Section 2. Purposes and Functions. (a) Recognizing the goals of enhancing the integrity, efficiency, orderliness, and competitiveness of our Nation’s financial markets and maintaining investor confidence, the Working Group shall identify and consider:

(2) the actions, including governmental actions under existing laws and regulations (such as policy coordination and contingency planning), that are appropriate to carry out these recommendations.

(b) The Working Group shall consult, as appropriate, with representatives of the various exchanges, clearinghouses, self-regulatory bodies, and with major market participants to determine private sector solutions wherever possible.

Section 3. Administration. (c) To the extent permitted by law and subject to the availability of funds therefore, the Department of the Treasury shall provide the Working Group with such administrative and support services as may be necessary for the performance of its functions.”

Get out of the markets before the inflated DERIVATIVE bubble bursts

The pre-911 U.S. markets showed an astounding – yet confounding and puzzling – rise for the 4 months proceeding 911. The U.S. media dubbed it a “patriotic rally”. The European Press called it a “PPT [Plunge Protection Team] rally”. Obviously, the U.S. markets were manipulated and rigged to an inflated value in advance of the 911 disaster. Was this a coordinated measure in anticipation of what was to come? Only The Powers That Be can answer that question directly.

Since 911, there have been at least three major long-term stock market rallies. In all 3 instances, when the markets opened all the indexes began to quickly plunge. In each incidence, by early afternoon the markets were brought back from the brink of collapse to the surprise of everyone, including historical analysts.

An event that should have sent markets spiraling downward was the Enron, et al, unprecedented corporate accounting scandals. Yet despite this, an unprecedented accross-the-board markets rally began on July 24, 2002. Once again, the European Press called it a “PPT rally”.

Outside the U.S., it’s no secret who is behind these secretive “no-name” purchases of high risk DERIVATIVE gambling wagers:

On September 16th, 2001, The Guardian reported “that a secretive committee… dubbed ‘the plunge protection team’… is ready to coordinate intervention by the Federal Reserve on an unprecedented scale. The Fed, supported by the banks, will buy equities from mutual funds and other institutional sellers… ”

On Feb 21, 2002, the Financial Times featured an article about Japan’s Stock Buying Body. The article stated that “…government backed equity markets, as Japan has recently become aware, do not work… Plunge protecting the world’s markets may be a hazardous pursuit.”

In each of these occurances, a large “no-name” buyer in the futures market secretly plunged in and bought up massive quantities of DERIVATIVES through banking groups such as JP Morgan. These were completely reckless gambling bets that the futures index [S&P] would rise even though it was obvious that it was going to fall. Because such a large amount of money was wagered on the S&P’s rise, in each instance, it reversed the market’s free-fall.

At the Federal Open Market Committee meeting on Jan 29-30, 2002, the Federal Reserve System (Greenspan) openly discussed the use of “unconventional methods” to stimulate the economy. Recently, the Financial Times of London quoted an anonymous U.S. Fed official who stated that one of the extraordinary measures “considered” in January 2004 was “buying U.S. equities”.

These gambling interventions by the “Four Financial Dictators” have successfully brought the markets back each time… despite the inflated financial realities that existed. The purchase of these gambling DERIVATIVES at a great loss have transformed each market crisis into a rally. By manipulating the markets in this way, they have further inflated the highly overvalued market indexes.

Perhaps Americans can now understand why the major U.S. banks, such as JP Morgan, are holding TRILLIONS of gambling derivatives on their books as the PPT group of four use them to rig the markets. Sooner or later, these market “fixes” will no longer hold the bubble from bursting.

Thus, we have witnessed the creation and growth of the financial bubble that is on the brink of explosion… and we know who rigs and controls the markets to create this inflated bubble of gambling debt.

In the same motus opperandi, the PPT group of 4 are currently buying metals futures (DERIVATIVES) in great amounts on the New York and Chicago exchanges. For the past two weeks, they have created a loss in silver and gold indexes by purchasing (at U.S. taxpayer’s expense) large gambling bets (derivatives) against the true value of intrinsic metals.

The result is that they have rigged the value of metals to discourage investors from purchasing gold and silver instead of U.S. Federal Reserve Notes. This is a measure by the PPT to plug a large hole in the bursting dam of the financial bubble, but even Hans Brinker cannot stop this leak.

The bottom line?
Stick with history and prepare for the financial explosion. When the bubble deflates and pops, economic deflation will control our daily lives. The PPT cannot continue to spend what it doesn’t have. The retirement funds they are “borrowing” from are already exhausted. Get yourself some gold and silver… it will buy your bread to survive in the coming future… while paper Federal Reserve Notes will burn in your furnace to heat your homes.